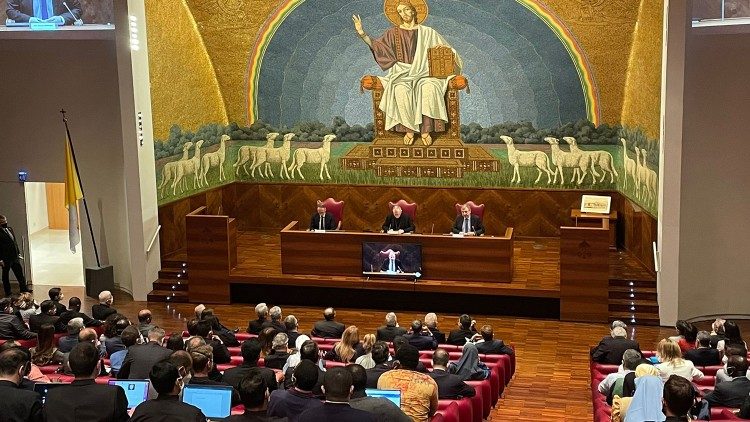 Cardinal Secretary of State Pietro Parolin says “Praedicate evangelium” represents the realization of one of the chief goals of Pope Francis’ pontificate: the reform of the Roman Curia.

Structural changes, novelties dictated by present contingencies, processes already underway for years and finally completed: Cardinal Secretary of State, Pietro Parolin, went to the heart of Praedicate evangelium, the Apostolic Constitution reforming the Roman Curia, which was published on 19 March and which will take effect 5 June. With the Apostolic Constitution, Cardinal Parolin said, “one of the main objectives that the present pontificate had set for itself from the beginning has been realized.”

The Cardinal opened a Study Day entitled, “Praedicate Evangelium: Structure, content and novelty,” which was organized by the Institutum Utriusque Iuris of the Pontifical Lateran University. The first major event since the publication of the Constitution, the study day is a significant moment of high-level discussion to understand the framework and criteria of the document with which Pope Francis has harmonized the changes to the Curia that have already been implemented and become operative during his pontificate. In addition to Cardinal Parolin, other speakers included Cardinal Marcello Semeraro, secretary of the Council of Cardinals for many years; the prefect of the Secretariat for the Economy, Father Juan Antonio Guerrero Alves; the prefect of the Dicastery for Communication, Paolo Ruffini, and the Auditor General, Alessandro Cassinis Righini. Bishop Marco Mellino, secretary of the Council of Cardinals, who had been scheduled to speak, was absent for health reasons.

In the Aula Magna, in the presence of lecturers and students of the “Ateneo del Papa,” Parolin recalled the stages that, over the past nine years, have led to the drafting of the Constitution reforming the Curia, which he described as “an instrument in the hands of the Pope” for the good of the Church and the service of the bishops.

Praedicate evangelium, he said, is a response to the “repeated requests made by the cardinals during the Congregations prior to the 2013 Conclave.” Among the first acts of his pontificate, the Pope established the Council of Cardinals with the mandate “to study a project for the revision of the Apostolic Constitution Pastor Bonus.” Cardinal Parolin explained, “The envisioned reform was implemented progressively over several years, with the creation of new bodies and with inevitable subsequent adjustments, in ‘running’ institutions, entirely new and called to work together.”

Now, he continued, “Praedicate evangelium seeks to draw conclusions from the experiences and adjustments of the past years, taking new steps,” in order “to complete the overall picture,” Cardinal Parolin, said according to three criteria: “the communion of ecclesial institutions, cooperation in inter-office relations, and adjustment of personal attitudes.”

Role and functions of the Secretariat of State

A large part of Cardinal Parolin’s speech focused on the role of the Secretariat of State, which “retains a special status in law because of its specific task of closely assisting the Supreme Pontiff in the exercise of his supreme mission.”

The functions of the Secretariat, he said, “are substantially the same as before,” albeit with some “variations.”

First and foremost, the changes relating to the economic sphere. In this regard, the Cardinal recalled the Motu proprio of 2020 that established that the Secretariat for the Economy would perform “the function of Papal Secretariat for economic and financial matters” and that investments and funds previously entrusted to the Administrative Office of the Secretariat of State would be transferred to the APSA. The new Constitution, he said, consolidated these changes. “The status of Papal Secretariat, as an office that closely assists the pastoral government of the Holy Father, is currently shared by two different curial institutions. In economic and financial matters, this status belongs to the Secretariat for the Economy, and in all other fields to the Secretariat of State,” Cardinal Parolin explained.

Official Communication of the Holy See

Cardinal Parolin also addressed the subject of the official communication of the Holy See, with the reorganization and creation of the Dicastery for Communication which, together with various institutions traditionally linked to the Secretariat of State (L’Osservatore Romano, Vatican Radio), also incorporated the Holy See Press Office.

The new provisions, Cardinal Parolin explained, “provide that the publication of the documents of the Holy See through the official Bulletin Acta Apostolicae Sedis remains reserved to the Section for General Affairs”; on the other hand, “that Section makes use of the Dicastery for Communication with regard to official communications concerning both the acts of the Pope and the activity of the Holy See, providing in this sphere precise ‘indications’ that the Dicastery must execute.”

Changes with regard to financial matters

Father Guerrero’s speech was wide-ranging, illustrating the changes that have taken place over the years in economic and financial matters. He described it as a “tortuous path” that has seen the establishment, suppression, amalgamation, or transfer of competencies of various economic bodies that have now been consolidated into the Council for the Economy, the Secretariat for the Economy, the Office of the Auditor General, and the Commission for Reserved Matters.

These bodies too, the Jesuit has repeatedly stressed, “are at the service of the mission”; and, in fact, they are not the “core business” of the Roman Curia, but an “aid to the service of the mission carried out by various curial Dicasteries and institutions,” where “the constant point of reference” is the Social Doctrine of the Church and “the duty is to preach the Gospel by example.”

The Holy See’s own financial actions are aimed at “aiding and obtaining material means to facilitate and make possible the Curia’s mission,” Father Guerrero stressed, “without causing the Church’s evangelization to lose credibility.” He insisted, “Efforts must be made so that the functioning of the Curia does not become an impediment to its mission”.

Father Guerrero went on to highlight a number of novelties introduced by Praedicate evangelium, such as the fact that financial transactions in investments must go through the IOR (the so-called “Vatican Bank”), or that the same investments, if over €500,000, must be approved by the Secretariat for the Economy (with the pandemic, the threshold was lowered to €100,000).

Finally, the Jesuit priest desired to clarify the nature and mission of the Commission for Reserved Matters, set up in September 2020 as envisaged by the so-called “Procurement Code.” It is a necessary clarification, he said, because the very name “reserved matters” could raise concerns that there are secret funds or financial actions that escape control. “No, there is no secrecy about the economy,” said the prefect. “Transparency” remains one of the guiding principles, but “in cases concerning the security of the State or of the Pope, or to preserve other Church assets, it is necessary that some activity or contract be submitted to the control of the competent bodies and the Commission’s authorization be requested.”

In the morning, Bishop Andrea Ripa, Secretary of the Apostolic Signatura, spoke on the topic of “conflicts of attribution” in what is commonly referred to as the Vatican’s “Constitutional Court.”

Professors Emile Kouveglio and Patrick Valdrini, respectively professor in office and professor emeritus of Canon Law at PUL, then spoke. The former dwelt on the theme of “primacy and episcopate” in Praedicate evangelium, starting from the “healthy decentralization” so often invoked by the Pope; the latter on how the Constitution moves in the constitutional law of the Church, taking up “the concept of a Curia with the character of a diakonia” [ministry of service]. Or rather of an “instrument,” as Paul VI described it, to which John Paul II added, “in the hands of the Pope.”