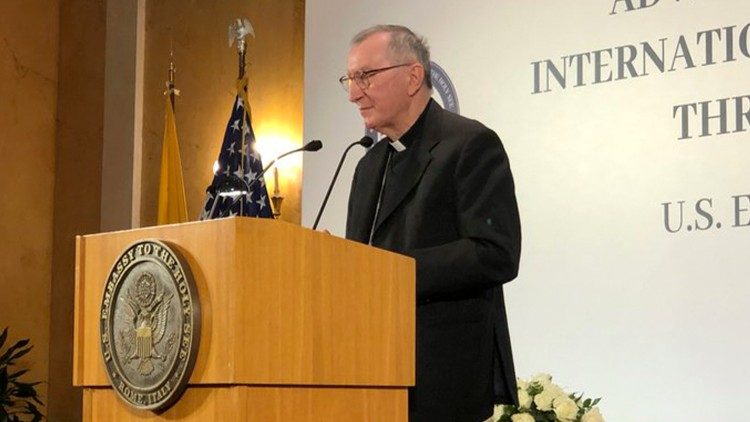 The United States Embassy to the Holy See hosts a symposium on Wednesday in Rome with Cardinal Pietro Parolin, U.S. Secretary of State Michael Pompeo and Archbishop Paul Richard Gallagher

On Wednesday, the United States Embassy to the Holy See hosted a symposium in Rome. Advancing and Defending International Religious Freedom through Diplomacy was its theme.

Shared priority for US and Holy See

In her welcoming remarks, U.S. Ambassador to the Holy See Callista Gingrich highlighted: “Promoting and securing the universal right of religious freedom is a shared priority for the United States and the Holy See”. This collaboration preserves this right, she continued, at a “critical time” in which international religious freedom must be advanced and defended.

U.S. Secretary of State Michael Pompeo opened his remarks reflecting on World War II because of the 75th anniversary of when it ended. He recounted the story of Fr Bernard Lichtenberg, arrested by the Nazi regime for his outspokenness and public prayer “for the Jews and other victims of Nazi brutality”. He also recalled Pope John Paul II’s “pivotal role in igniting the revolution of conscience that brought down the Iron Curtain”. The U.S. Secretary of State then criticized China in regard to religious freedom.Religious freedom, he said, depends on Christian leadership and the moral witness of those who have withstood persecution.

Representing the Holy See were the Cardinal Secretary of State Pietro Parolin and Archbishop Paul Richard Gallagher, the Holy See’s Secretary for Relations with States.

Archbishop Gallagher extended Pope Francis’s greetings to the participants, saying the Pope “is aware of this meeting on a topic of great importance for the Holy See, especially in its diplomatic activities on both the bilateral and multilateral levels”.

Awareness has been growing, the Archbishop acknowledged, regarding the role religions play in questions such as international peace, security, and mutual coexistence. Due to this reality, protecting religious freedom “is one of the main political priorities of the Holy See”, he said. It is important because of the innate dignity of the human person, created in God’s image and likeness, and is “foundational to each person’s identity”, their own integral development and that of society.

Persecution of religious liberties is not limited to physical persecution. Ideological trends and silencing through “political correctness” are also forms of attacking religious freedom, Archbishop Gallagher explained. “Particularly unacceptable and offensive”, he said, is the pressure that religious freedom and conscientious objection must be abandoned in the name of promoting other “so-called human rights”.

Holy See at the service of the persecuted

The Holy See is committed to remaining in the discussion, the Archbishop said. This discussion is now guided by the “teaching and engagement” of Pope Francis, and stresses “the importance of dialogue and mutual understanding among peoples and societies” and “different religious” persuasions.

Concluding the symposium, Cardinal Parolin reiterated that defending and promoting religious freedom is a “hallmark of the diplomatic activity of the Holy See”. This right, coupled with the “inviolable right to life”, is the foundation for all other human rights, the Cardinal said. When this freedom is violated, the “enjoyment of all rights” is put in jeopardy. Freedom of conscience is also intimately connected to religious freedom because it is the “inner sanctum” in which we discover a law we “have not laid upon” ourselves, but which we “must obey”.

Cardinal Parolin expressed the insight that violations against religious freedom today are rooted in a misunderstanding of human freedom. Intolerance is shown not only by prohibiting people from exercising their religion, but also through “the intolerant voices of the politically correct” who are themselves intolerant of others’ religious beliefs. When the highest good attainable is that of removing any obstacle to the individual freedom to choose, leading to an exaggerated personal freedom, the common good is threatened, he said. This type of freedom is rooted in the self, rather than in the Creator, and does not seek the good of others.

Freedom to seek the truth

In concluding, the Cardinal noted that understanding religious freedom solely as “freedom from coercion” is only a partial understanding. The positive aspect of this freedom is “the freedom to seek the truth”, the “freedom for belief”. It is the freedom to discover “the ultimate truth of one’s existence, one’s origin and destiny given by the Creator”. This is the “tool”, he said, that needs to be given to believers. Unless believers discover the purpose for which they were created, “an end that exists beyond the self”, the Cardinal said, “we cannot hope but to find a society in crisis, with each of us unable to embrace anyone but ourselves”.

Responding to questions from journalists on the sidelines of the Symposium, Cardinal Parolin stated that the Holy See believes in a policy of taking small steps and that the Agreement on the appointment of bishops is a step toward greater religious freedom as well. Therefore, he declared it is not appropriate to use the topic of the Agreement between the Holy See and China for internal electoral purposes in the United States.

Religious together for a global reform of child care