Overview of the Church in Greece ahead of Pope’s visit 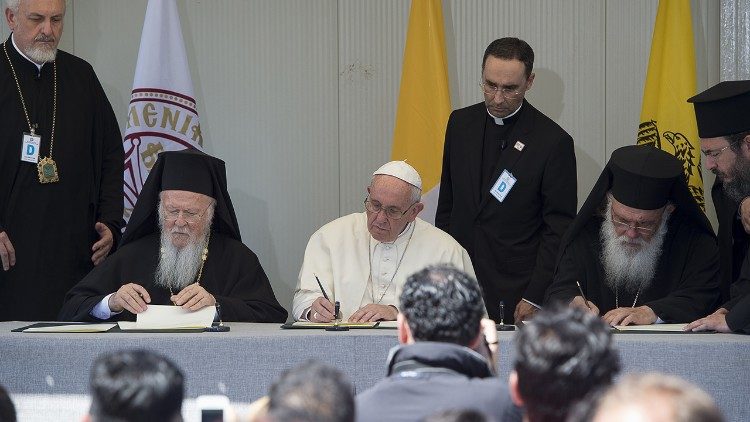 After visiting Cyprus from 2-4 December, Pope Francis will travel to Greece where he will visit Athens and the island of Lesbos, which he visited in 2016. We offer an overview of the Catholic community in this majority-Orthodox country and of the challenges facing the local Catholic Church today.

The Orthodox Church has played a major role in Greek history. Adherence to this Church, which is autocephalous (ecclesiastically independent) since 1850, was established as a hallmark of Greek ethnic identity in the first constitution in early 19th century, when Greece obtained independence from the Ottoman Empire.

Its primacy was confirmed in subsequent constitutions and also in the new democratic constitution of 1974, that established the Orthodox Church as the “prevailing” religion in the country, though it recognizes religious freedom for all faiths. 90% of Greeks still identify as Greek Orthodox today, though not all are practicing believers.

Religious minorities include Catholics, Protestants, Anglicans, as well as Muslims (1%) concentrated on the border with Turkey, and a small Jewish community.

Official figures on the Catholic population

According to the Vatican’s latest figures, Catholics, mainly Latin rite, make up 1.2 % of the population (that is, 133,000 out of some 11 million inhabitants), most of whom are not ethnic Greeks. However, local figures show higher numbers, including several thousand immigrant workers with temporary residence permits, refugee and asylum seekers. In 2018, the Greek Catholic Church estimated up to 400,000 Catholics living in the country.

The largest foreign groups are Polish nationals (40,000) and Filipinos (45,000). In addition, the number of Catholics from the Middle East has significantly increased due to war, namely from Iraq and Syria. Other ethnic groups include Albanians, Bulgarians, Ukrainians and Armenians. Moreover, immigration has caused an increase in Eastern rite Catholics.

Significant Catholic communities are to be found in the Cyclades Islands (especially in Syros and Tinos) and also in Corfu, Patras, Giannitsa, Thessaloniki, Kavala, Volos and in several other cities of mainland Greece.

The local Church carries out an intense pastoral and social work. However, the geographical dispersion of the Catholic community and its heterogeneous makeup, amidst declining local vocations, have made this work more challenging.

Immigration has undoubtedly enriched the local Church, but also requires increased human and financial resources to meet growing pastoral and social needs, also to integrate the newcomers in the local parish communities.

The ongoing economic crisis that has hit the country since 2009 has further aggravated these difficulties. The fiscal tightening imposed on Greece by the so-called “European troika” (IMF, ECB and the European Commission) has also put a strain on the finances of Catholic dioceses, parishes and charities engaged in supporting impoverished Greek families, as well as the thousands of immigrants and refugees fleeing war and poverty.

With increased expenses and lower Sunday Mass offerings, the Catholic Church (which unlike the Orthodox Church does not benefit from State support) is having to pay substantially higher taxes as compared to the past.

Active role in supporting the most vulnerable

Greek Catholic bishops have repeatedly called attention to these difficulties, also criticizing the austerity policies imposed by Brussels that have increased poverty across the country, as confirmed by the local Caritas network.

Indeed, Caritas Greece in collaboration with Caritas Internationalis and other Catholic charities have been on the frontline in responding to the crisis and in supporting the needs of the poor and the most vulnerable, including migrants in the Aegean islands and in mainland Greece. This work has continued during the Covid-19 pandemic.

Ecumenical relations between the Catholic and the majority Orthodox Church in Greece have made some progress in recent years. An important step forward was St. John Paul II’s Jubilee Pilgrimage in the footsteps of St. Paul the Apostle, in 2001.

It was the first ever visit by a Roman Pontiff in the country. The highlight of that historical event was the Pope’s request for forgiveness for the Crusade’s Sack of Constantinople in 1204 and the signing of a Joint Declaration on the Christian roots of Europe with the Greek Orthodox Primate Christòdoulos, on 4 May 2001.

Since then, the Holy See and the Autocephalous Church of Greece have seeked closer collaboration in the pastoral field and on practical issues of common interest, especially in the context of the European Union. This was further testified by the Joint Declaration signed by Pope Francis, the Greek Orthodox Primate Ieronymos II and the Patriarch of Constantinople, Bartholomew I, during their visit to the refugee camp of Moria, on the Greek island of Lesbos, on  April 16 2016.

In that Declaration, the three Church leaders joined in calling upon the international community “to employ every means to ensure that individuals and communities, including Christians, remain in their homelands and enjoy the fundamental right to live in peace and security”, while committing “firmly and wholeheartedly” to intensify their efforts “to promote the full unity of all Christian”.

More recently, Cardinal Leonardo Sandri, Prefect of the Congregation for the Eastern Churches, reiterated the Holy See’s hope for greater collaboration between the two Churches, especially in the service of charity and in the promotion of Christian values in Greek society, on the occasion of his visit to the country in November 2019.

Pope to Pauline Family: Preach Christ with prayer and all available media

Overview of the Church in Cyprus ahead of Pope’s visit