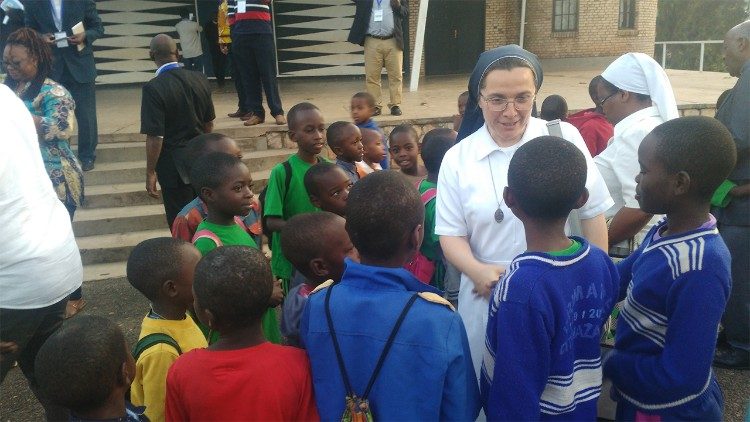 The Apostolic Nuncio to the United States, Archbishop Christophe Pierre, says the generous contributions collected for World Mission Sunday, which takes place on 23 October, serve as concrete assistance to those most in need, the vulnerable, and those facing persecution and intimidation, worldwide.

Educating children in mission schools; helping orphans, the elderly, and the sick; building and repairing chapels and churches; helping missionary dioceses; and supporting religious formation and seminaries, are just some reasons the imminent Pontifical Mission Sunday collection in the United States has great importance, says Archbishop Christophe Pierre, the Apostolic Nuncio to the United States.

The 95th edition of World Mission Sunday this year falls on 23 October.

World Mission Sunday is the Holy Father’s annual appeal for spiritual and financial support, ensuring that the life-giving work of overseas missions and missionaries can continue.

It is a concerted global effort that enables the Church to build up local churches in Asia and Africa, the Pacific Islands, and parts of Latin America and Europe.

The Sunday, which was instituted by Pope Pius XI in 1926 and held its first worldwide collection the next year, is held globally on the next-to-last Sunday in October every year.

It is a moment for the entire Church to provide help to over 1,100 dioceses.

‘You shall be my witnesses’

Pope Francis’ message for World Mission Sunday is a reflection on this year’s theme: “You shall be my witnesses” (Acts 1:8).

The Holy Father recalls that the Church is missionary by nature and that we are called at Baptism to share in this mission together.

“Every Christian is called to be a missionary and witness to Christ. And the Church, the community of Christ’s disciples, has no other mission than that of bringing the Gospel to the entire world by bearing witness to Christ. To evangelize is the very identity of the Church.”

The Pontifical Mission Societies in the United States work through local Bishops, churches, and missionary congregations to ensure that resources are distributed equitably and justly, based on the needs of individual churches.

The money goes directly from the United States to the Bishops in the mission territories, allowing for a direct link between the two local churches.

Archbishop Pierre underscored the day’s importance, based on his experience serving the Church across the globe.

“My own diplomatic service in several mission territories, including Uganda, Haiti, Mozambique, Zimbabwe, and the Pacific Islands,” he shared, “has given me firsthand experience of the vital importance of the Mission Sunday collection.”

“The generous contributions of the faithful in the United States make it possible for the Pontifical Mission Societies to provide annual subsidies to missionary dioceses, and to directly support mission seminaries and religious formation houses, the education of children in mission schools, the building of chapels and churches, as well as sustaining homes for orphaned children, the elderly and sick.”

“This support,” Archbishop Pierre insisted, “makes possible the proclamation of the Gospel, the celebration of the Sacraments, and service to the poor in mission dioceses.”

Bearing witness, where persecuted or threatened

The U.S. National Director of the Pontifical Mission Societies, Monsignor Kieran Harrington, explained that supporting the missions serves the universal Church across the continents.

“By prioritizing support for pontifical missions, we work with the Holy Father to ensure there is a fair distribution of our giving to all in need of our support and Christian witness. We serve the whole Church to make certain Christian charity truly extends to all.”

“We are called to bear witness to the miracles of God and to the Church that is growing and joyful in Nigeria, where priests and nuns are murdered for their faith,” he said, “as well as in scores of other places, where the faithful persist in embracing the Good News of the Gospel despite the deprivations and persecution imposed on them by those who feel threatened by it.”

Israel, Catholic migrants and the great faith of those who suffer invisibility