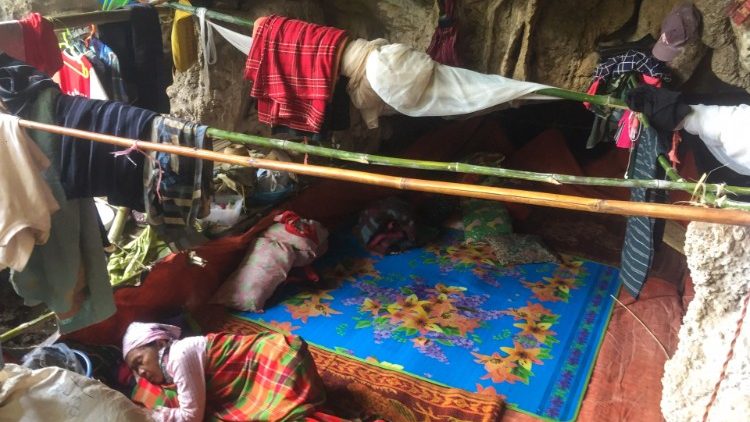 Innocent civilians are continuing to flee fierce fighting between Myanmar’s military and armed resistance groups in the eastern state of Kayah, as the country’s Catholic Bishops appeal for an end to the targeting of civilians and respect for churches, hospitals, and schools.

There have been 3 dead and 7 wounded, all Catholics, in air raids by Myanmar army in the early hours of Monday on refugee camps in the forests around Loikaw, the state capital of Kayah.

A local Catholic Church source in Myanmar told the Vatican’s Fides news agency that these people had earlier been displaced from their villages and from the state capital, which is now deserted, during clashes between the army and the People’s Defense Forces (PDF).

The National Unity Government (NUG), a body claiming to be the legitimate government of Myanmar in exile, formed these spontaneous militia groups on 5 May 2021, after the military seized power in a 1 February 2021 coup, deposing the elected government of Aung San Suu Kyi.

Among the displaced in Kayah are many Catholics, who have abandoned their homes and parishes to take refuge in the forests. The 17 January military raids in the densely populated jungles killed two sisters, Natalia, 18, and little Rosetta, 7; along with a 50-year-old man, Felice. Seven others wounded needed care. They had earlier fled from the nearby village of Moso, where the charred bodies of at least 35 Catholics were found on 24 December, in what was described as “the Christmas massacre”.

On Tuesday, the Catholic community gathered in the jungle where Fr. Jacob Khun led a simple funeral rite, dedicating brief words to the memory of the victims and inviting those gathered there to hope and prayer.

The widening conflict, particularly in predominantly Christian regions inhabited by the Kachin, Chin, Karen, and Kayah ethnic groups, has resulted in churches being shelled and raided by air.

Churches converted to shelters for the displaced are being targeted by the army, and priests and pastors are being arrested, while many unarmed civilians, including Christians, have been killed.

The Sacred Heart of Jesus Church in Doukhu was recently hit. Six Catholic parishes in the city of Loikaw are deserted, and the faithful who are exposed to hunger, cold, poverty and violence need material help and spiritual comfort.

Last week, the Catholic Bishops’ Conference of Myanmar (CBCM) urged all parties to the conflict to provide safe humanitarian corridors for relief operations, stop targeting civilians and respect the integrity of churches, hospitals and schools.

“Human dignity and the right to life should never be compromised,” the country’s Bishops wrote in a statement at the end of their annual assembly in Yangon, held on 11-14 January. The appeal was signed by CBCM president Cardinal Charles Bo of Yangon and all the bishops.

United Nations experts have warned the country could slide into a full-blown civil war with further drastic consequences.

Overall, the people of Myanmar are facing an unprecedented political, socioeconomic, human rights and humanitarian crisis, with needs escalating dramatically since the military takeover and a severe Covid-19 third wave.

According to a report on Myanmar in December by the United Nations Office for the Coordination of Humanitarian Affairs (OCHA), the turmoil is projected to have driven almost half the country’s 54 million people into poverty, heading into 2022, wiping out the impressive gains made since 2005.

It is now estimated that 14 out of 15 states and regions are within the critical threshold for acute malnutrition.

OCHA estimates that of Myanmar’s 54 million people, 25 million are in poverty, with 14.4 million in need of humanitarian need in some form or other. The number includes 6.9 million men, 7.5 million women, and 5 million children.

Thousands of Myanmar civilians have fled into neighbouring countries since clashes between Myanmar’s military and armed ethnic groups have reignited. The UN’s refugee agency, UNHCR, estimates there are over 91,000 refugees in various camps in Thailand, including those who fled before the coup.

A United Nations envoy on Monday sought Thailand’s support to prevent a deterioration in the crisis in Myanmar, and welcomed assurances that refugees fleeing military operations would be protected by the Thai government.

Noeleen Heyzer, the UN secretary-general’s special envoy on Myanmar, met with Thai Prime Minister Prayuth Chan-ocha on Monday, to seek support for international efforts to help displaced people and press Myanmar’s junta to commit to a five-point peace plan it agreed to with the Association of Southeast Asian Nations (ASEAN).