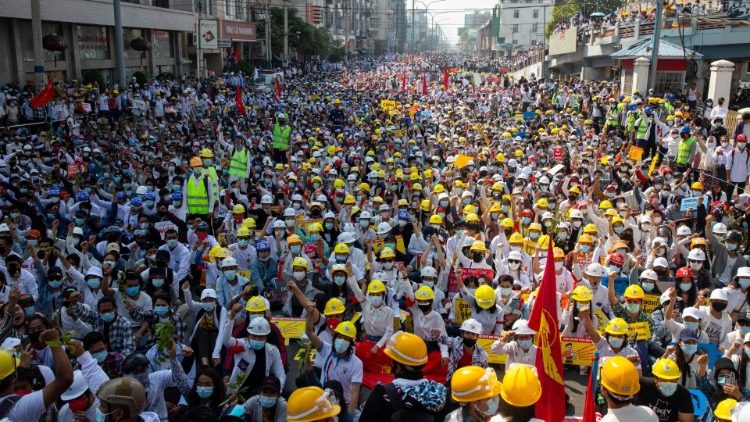 Soldiers claimed the cathedral was supplying weapons for rebels and coup opponents but left without finding anything during the search.

Yet another Catholic church in Myanmar became the target of the military junta last week.

Soldiers arrived around 2.30 pm and some stood guard outside the compound of the second-largest cathedral in Myanmar, while others searched all the buildings in the complex.

Archbishop Marco Tin Win, some priests, and staff were present during the raid but all were safe and none were detained, church sources said.

A church source told UCA News the army claimed to have been tipped off about weapons being hidden in the clergy centre.

The 61-year-old archbishop, who was in another building at the time of the raid, was taken to the cathedral and made to sit with the others, Catholic News Agency (CNA) reported.  Vicar general Father Dominic Jyo Du tried to explain to the soldiers that the only money they had were donations raised for the poor but he was pushed into the cathedral with others.

Most of the soldiers left after nearly three hours without finding any weapon, except for two blunt ceremonial swords gifted to the archbishop. The CNA source quoted a cleric who said “no one was hurt but they were shaken up”.

However, some soldiers remained on but left later on Saturday.

The archbishop and protesters

Mandalay, Myanmar’s second-largest city and commercial centre after Yangon, has a large population of ethnic Tamils who are Catholic or Muslim. They have never shown open hostility towards the coup leaders.

The news of the military raid spread quickly among the minority local Catholic community in the city’s five parishes, causing much concern.

Archbishop Tin Win has openly lent moral support to the pro-democracy protesters by taking to the street in front of the clergy’s house in Mandalay in February.

“We were relieved that no one was hurt or arrested and we could resume our church services,” said a parishioner who joined the Way of the Cross after the soldiers left in the evening.

The archbishop has designated Saturday evenings for one-hour adoration and the first Sundays of every month for Eucharistic celebration seeking peace in the conflict-torn nation.

The impoverished Southeast Asian nation was thrown into crisis after its military, headed by Senior General Min Aung Hlaing, deposed the elected government of Aung San Suu Kyi’s National League for Democracy (NLD) on 1 February 2021.  They imprisoned her and other elected leaders, triggering widespread protests and strikes, calling for their release and the restoration of the democratic process.

The security forces unleashed a bloody crackdown on the opponents, killing more than 1,700 protesters and arresting over 11,000 so far, according to the latest tally by the Assistance Association for Political Prisoners (AAPP), a rights group that documents and compiles casualties under the coup. The actual number of fatalities is likely much higher.

The military’s offensive has reignited its old conflicts with the country’s armed rebel groups, especially in the predominantly Christian states of Chin, Kayah, and Karen, inhabited by the Kachin, Chin, Karen, and Kayah ethnic groups. Besides, numerous independent civil resistance groups have sprung up in defence against the junta’s atrocities.

Catholic clergy and institutions continue to be prime targets for the military junta in Myanmar, despite calls from across the globe to end the conflict and oppression.

Three Catholic villages in the Sagaing region that are under the Archdiocese of Mandalay have been severely affected by military attacks and raids, with four people being killed and thousands displaced from their homes.

The latest targeting of a cathedral came after attacks on churches belonging to Catholic, Baptist, and other denominations in the Christian strongholds of Chin state and Kayah state. Priests and pastors have been arrested while many unarmed civilians, including Christians, have been killed.

The dioceses of Hakha, Kalay, Loikaw, and Pekhon out of the 16 dioceses in the conflict-torn nation have been badly hit.

The coup has led to a large number of displaced within the country and beyond its borders.

As of 4 April 2022, the United Nations refugee agency, UNHCR, estimated there were 907,500 Internally Displaced Persons (IDPs) across Myanmar, including 560,900 newly displaced since the coup.

Churches that have been sheltering displaced people fleeing clashes between the army and armed groups are often being targeted, raided, and shelled by the military. Priests and pastors are being arrested, while many unarmed civilians, including Christians, have been killed.

The coup signalled the end of 10 years of reforms towards democratic rule after nearly 5 decades of harsh military rule.

Way of the Cross: Families share pain of loss and horrors of war