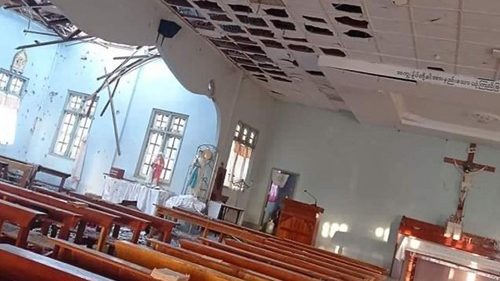 The Myanmar military on Monday carried out a raid of some 7 hours on the cathedral and bishop’s house compound of Loikaw Diocese in Kayah State, making several arrests

Myanmar’s military has raided the bishop’s house and a church-run clinic in the Catholic stronghold of Kayah state and arrested 18 healthcare workers, UCA News reported.

More than 200 soldiers and police officers stormed Christ the King Cathedral compound in Loikaw, the capital of Kayah state. They forcibly entered Caritas’ Karuna (compassion) clinic, the bishop’s house, and the church building on November 22, according to church officials.

They forced some 40 patients, including four infected by the Covid-19 virus, to move out; and arrested 18 healthcare workers including four doctors, nurses, pharmacists, and volunteers, besides taking away records of medical equipment. A priest and two nuns accompanied those arrested to the interrogation centre.

“One group after another checked and searched the buildings including the bishop’s house at least three times,” a church official said. More soldiers were deployed and roads leading to the cathedral compound were blocked during the raid.

Church officials said the security forces checked all the buildings in the bishop’s house compound from around 9 am to 4 pm and also broke into the room of the social communications officer.

“We are carrying out charitable works and weren’t involved in any wrongdoing,” Father Francis Soe Naing, chancellor of Loikaw Diocese, told UCA News.  “We have no idea why they raided us and what they searched for.”

Raids and attacks on the country’s religious institutions and properties, including places of worship, have taken place following the military coup of February 1 that threw the nation into chaos, with nationwide protests, strikes, and a civil disobedience movement demanding the restoration of the government and the release of their leader, Aung San Suu Kyi.

The junta’s security forces responded with a bloody crackdown on opponents of the coup, which has also reignited the military’s old conflicts with some of the armed ethnic organizations who are backing the protesters. Several independent civil resistance groups have also sprung up in self-defence.

The widening conflict, particularly in predominantly Christian regions inhabited by the Kachin, Chin, Karen, and Kayah ethnic groups, has resulted in churches being shelled and raided. Priests and pastors have been arrested while many unarmed civilians, including Christians, have been killed.

At least 10 parishes in Loikaw Diocese have been severely affected by the recent conflict, displacing more than 100,000 people including Catholics. The Church is responding to the needs of around 70,000 IDPs and providing humanitarian assistance in the form of health services, food, and blankets, a priest said.

At least five Catholic churches have been damaged by artillery shelling in the Loikaw Diocese, while a church and Marian shrine were damaged in Pekhon Diocese in the past five months.

Father Naing said Monday’s raids on Kayah cathedral property caused fear and insecurity among patients and some internally displaced persons (IDPs) who had taken refuge there after fleeing their homes when fighting intensified in May.

The eastern state of Kayah, a remote and mountainous region bordering Thailand, is regarded as a stronghold of Catholicism in the Buddhist-majority country. About 90,000 Catholics live in the state with a population of 355,000.

The latest military assault on Christians in ethnic regions is not the first time that minority Christians have been attacked and targeted. Christians have borne the brunt of the decades-old civil war and faced oppression and persecution at the hands of the military, which ruled for more than five decades.

According to Assistance Association for Political Prisoners (AAPP), a rights group that compiles and documents civilian fatalities after the coup, on Monday confirmed 1,286 people killed so far by the junta, with 10,380 arrested.