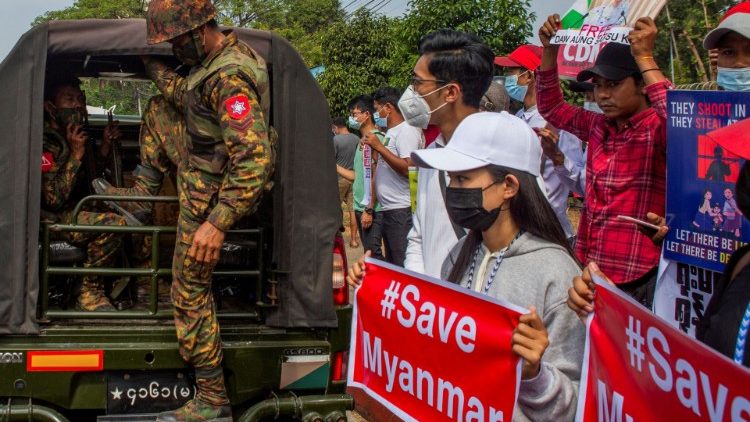 The February 1 military coup in Myanmar a year ago and nationwide protests that followed have triggered an unprecedented political, socioeconomic, human rights and humanitarian crisis, amid a severe Covid-10 pandemic.

Ahead of the first anniversary of the military coup in Myanmar next week, the Italian chapter of Aid to the Church in Need (ACN) is inviting Christians to dedicate the day to prayer in solidarity with the people of Myanmar.

The 1 February 2021 coup toppled the country’s elected government and jailed its leader Aung San Suu Kyi and other elected leaders.  The massive anti-coup protests that followed across the country has been met with a brutal crackdown by security forces, killing nearly 1,500 peaceful protesters and arresting over 11,700.

ACN, a Pontifical Foundation that has been assisting persecuted, oppressed and needy Christians worldwide for more than 70 years, has responded to a recent appeal by the Catholic Bishops’ Conference of Myanmar (CBCM) and called for a day of prayer on 1 February as a sign of communion with the local Church.

“The CBCM will continue seeking the fellowship of universal Church and donor community to seek support to all our Myanmar people, without any discrimination,” the bishops wrote in a statement on Jan 14, at the end of their general assembly in Yangon.  “As the CBCM stands for justice, peace, reconciliation, it strongly demands all concerned to facilitate humanitarian access to suffering and internally displaced peoples in order to provide them with the basic humanitarian assistance. Human dignity and the right to life can never be compromised.  We strongly demand respect for life, respect for the sanctity of sanctuary in places of worship, hospitals, and schools. All those who reach out to help the people must be protected,” the CBCM wrote.

The military’s offensive against the protesters has reignited old conflicts with the country’s armed rebel groups, especially in the predominantly Christian regions inhabited by the Kachin, Chin, Karen, and Kayah ethnic groups.  Churches that have been sheltering displaced people fleeing clashes between the army and armed groups are being targeted by the military.  Priests and pastors are being arrested, while many unarmed civilians, including Christians, have been killed.

Among the regions most affected by this conflict are the states of Chin, Kayah and Karen. Since mid-December, when the end of the rainy season has facilitated travel, the repression has again intensified, especially in the south-east. ACS has learned that at least 14 parishes in Kayah state have been abandoned. Many priests and members of religious orders accompanied their people, taking refuge in the jungle or in remote villages. Others remain in almost deserted centres.

In recent weeks, one of the main targets of the army’s attacks has been Loikaw, the capital of the state of Kayah. Among the thousands of refugees from the surrounding areas, there are also 300 internally displaced people who have taken refuge in the compound of the cathedral of Loikaw Diocese.

The massacre of at least 35 civilians, killed, burned and maimed at Christmas in the village of Mo So, in Kayah, once again demonstrated the level of atrocity by the junta.  Airstrikes and shelling in Karen state also forced thousands of people to flee across the Thai border.

United Nations experts have warned the country could slide into a full-blown civil war with further drastic consequences.  Overall, the people of Myanmar are facing an unprecedented political, socioeconomic, human rights and humanitarian crisis, with needs escalating dramatically since the military takeover and a severe Covid-19 third wave.

According to a recent report by the United Nations Office for the Coordination of Humanitarian Affairs (OCHA), Myanmar’s turmoil is projected to have driven almost half the country’s 54 million people into poverty, wiping out the impressive gains made since 2005.   It is now estimated that 14 out of 15 states and regions are within the critical threshold for acute malnutrition.

OCHA estimates that of Myanmar’s 54 million people, 25 million are in poverty, with 14.4 million in need of humanitarian aid in some form or other. The number includes 6.9 million men, 7.5 million women, and 5 million children.

The bishops of Myanmar, individually, collectively or with representatives of other faiths, have repeatedly called for an end to the violence and a return to dialogue. Pope Francis has backed their appeal on several occasions. “Sustain the people of Myanmar, where intolerance and violence not infrequently target the Christian community and its places of worship, clouding the peaceful countenance of that people,” the Pope prayed in his Urbi et Orbi Christmas message.  And more recently, addressing the diplomatic corps in the Vatican on 10 January, he said, “Dialogue and fraternity are all the more urgently needed for dealing wisely and effectively with the crisis which for almost a year now has affected Myanmar.”  “Its streets, once places of encounter, are now te scene of fighting that does not spare even houses of prayer,” the Holy Father lamented.

Cardinal Czerny calls for prayers and solidarity with Tonga

Christians across the world join in prayer for Ukraine