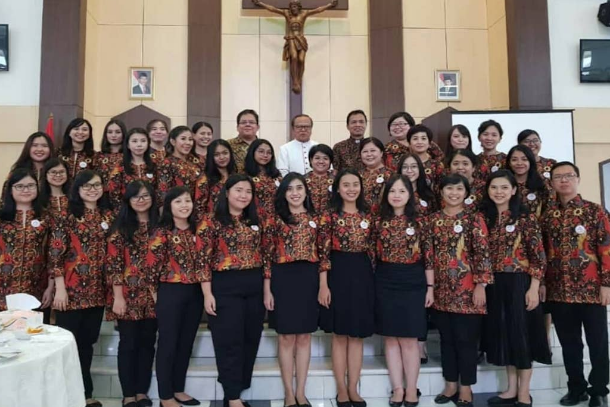 Muslims on the Moluccas Islands are offering their homes to thousands of Catholics participating in Indonesia’s first National Catholic Choir Festival if they need a place to stay, according to a prominent local Muslim leader.More than 7,000 Catholics from all the country’s 34 provinces are descending on Ambon, the capital of Malukuprovince, to take part in the festival, or Pesparani, which begins on Oct. 27.  The six-day festival is being organized by the Catholic National Pesparani Formation and Development Agency, known as LP3KN.”If all hotels and lodgings in Ambon are fully booked, Muslims living in the town are willing to accommodate our Catholic brothers and sisters. Muslims here realize that the festival does not belong only to Catholics but also to all people in this province,” Abdullah Latuapo, chairman of the provincial chapter of the Indonesian Ulema Council, told ucanews.com on Oct. 25.Local Muslims will be on hand to help Catholic singers during the festival,” said Latuapo, who is also a lecturer at the State Institute of Islamic Studies in Ambon.Sacred Heart Bishop Petrus Canisius Mandagi of Amboina called the offer “a symbol of local Muslims’ love and support for Catholics.””It actually displays the true identity of Indonesian people. Indonesian people are open to all religions. It also shows that Indonesian people with their different religious backgrounds can live in harmony,” said the prelate.He felt the gesture also underscored how far the region had come after since sectarian unrest threatened to tear the region apart.The province was the scene of sectarian violence around the turn of the millennium between Muslims and Christians that claimed around 5,000 lives. A clash in 2011 left at least five people dead.Bishop Mandagi also expressed hope that President Joko Widodo would show his support by spending at least one day to in the town during the festival.According to Adrianus Meliala, chairman of the national organizing committee, all participants will be staying in hotels. “We do appreciate the offer,” he said