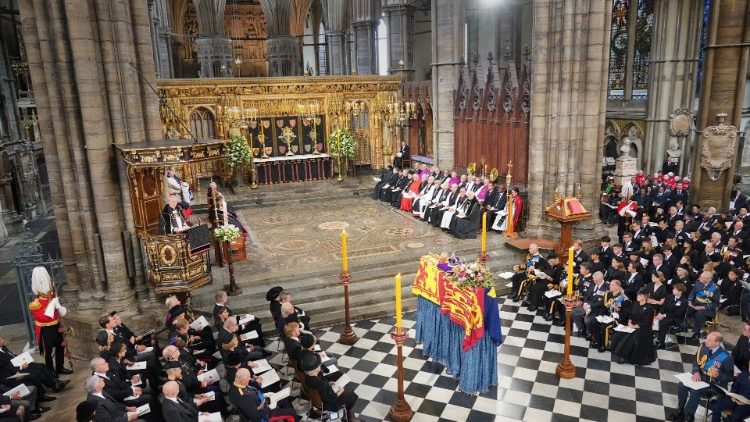 It was the day where mourners from across the world came together to say their final farewell to Elizabeth II, Britain’s longest reigning monarch who died on September 8th at the age of 96 after more than 70 years on the throne. There was pomp and pageantry at the funeral ceremony held at London’s Westminster Abbey but also scenes of personal and public grieving.

Britain’s new King, Charles III had led a sombre procession of royal family members behind his mother’s coffin as it was taken from the nearby Westminster Hall to the Abbey for the funeral service.

Dedicated to serving her people

The congregation of around 2,000 people included 500 world leaders, foreign dignitaries and members of European royal families. Among the guests was Pope Francis’ representative, Archbishop Paul Gallacher, Secretary for Relations with States. They heard a series of tributes to the late Queen’s life-long sense of duty and dedication to her people.

The sermon at the funeral was given by the Anglican leader, Archbishop Justin Welby who spoke of the biblical call to serve rather than being served. He recalled how the late Queen at the age of 21 had vowed that her whole life would be dedicated to serving the nation, saying “rarely has such a promise been so well kept.”

A series of other church leaders offered prayers at the funeral service including the leader of the Catholic Church in England and Wales.  Cardinal Vincent Nichols, Archbishop of Westminster, gave thanks to the late Queen for “the rich bonds of unity and mutual support that she sustained.”

Following the funeral ceremony there was a solemn procession as the coffin was borne on a gun carriage for the monarch’s final journey across London. Huge crowds lined the route of the procession as gun salutes were fired and the bells of the capital’s famous Clock Tower Big Ben tolled every 60 seconds.  The coffin was later transferred to a hearse for the journey to the Queen’s final resting place in St. George’s chapel at Windsor Castle.

It was a fitting send-off for a much respected and loved Queen who had been such a key figure on the world stage for over seven decades.

Pope to new Bishops: Be open to dialogue and close to poor