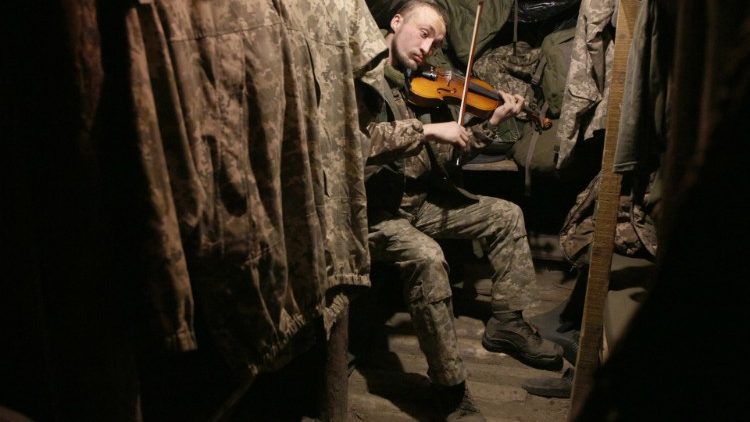 In a message for the Ukrainian Greek Catholic Church on the eve of Christmas, Major Archbishop Sviatoslav Schevchuk talks of his hopes for peace in the war-torn nation and of unity in a divided world.

“Do not be afraid” says Major Archbishop Sviatoslav Shevchuk, the head of the Ukrainian Greek Catholic Church (UGCC).

This message “of the angels given to the pastors who were in vigil with their sheep” is the same one that he chooses to send to Ukrainian Greek Catholics worldwide as they prepare to celebrate Christmas.

The UGCC celebrates Christmas following the Julian calendar. It starts with Christmas eve on 6 January and ends on 19 January, the date of “Yordan” or Epiphany.

The ‘apocalypse’ for Christians, he continues, “is the revelation of the authentic face of our Lord”. This is why “we should not be afraid”, he explains: “because our future was born as a small child” and through this child we see and receive the blessings and tenderness of our Lord. God is with us, “with his love for mankind”, he says.

Praying for peace in Ukraine

Referring to the political crisis facing Ukraine at the moment, in light of Christmas, Major Archbishop Sviatoslav says that the Nativity of the Lord is always linked with “expectations of universal peace”. “In a special way,” he continues, “we are praying for peace in our country.”

The Patriarch notes that, as the prophet Isaiah said, “there is no peace without truth and justice”. He explains that “in order to be able to receive this divine peace which Christ is bringing with him from heaven” we must bear witness to the truth, but we must also “be constructors of authentic justice”, says the Major Archbishop Sviatoslav. This, he continues, means “social justice; justice in our relationships with our neighbours”, which, he stresses, is “the foundation of the universal human society and the universal human family.”

“We are praying for peace, but we have to work hard in order to bear witness to the truth and to operate to be the constructors of the final justice in our world.”

Finally, Major Archbishop Sviatoslav stresses that “when we contemplate the new born Christ we experience the unity of the whole human race.” He speaks specifically of the pandemic, through which “we rediscovered that we are all united” and vulnerable but that “we are all members of the same human family.”

“So from Kyiv, from the heart of  your mother Church, I convey to you this message of unity, of solidarity: a message of love for our neighbours – a message of the worldwide solidarity.”

“We can pray together”, concludes Major Archbishop Sviatoslav, “that the new born Christ will bless us and all our families” and will shed light on how to move forward together as a global Ukrainian Greek Catholic Church which lives and professes the same faith and same church traditions in different states and nations around the world”.