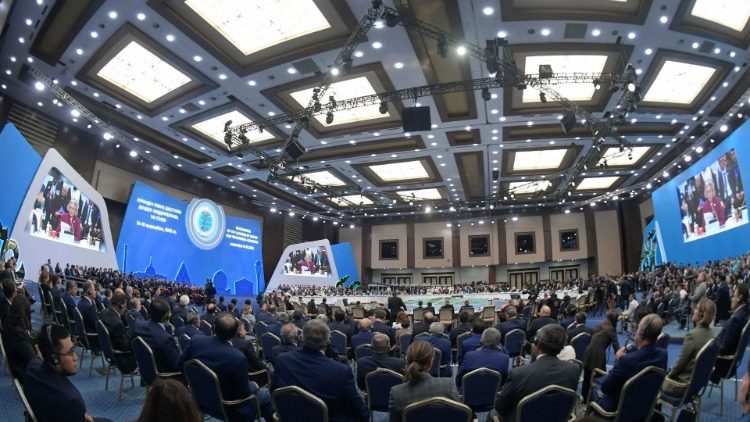 Concluding the 7th Congress of Leaders of World and Traditional Religions in Nur-Sultan, interreligious leaders from around the world adopt a declaration expressing a common desire to work towards a better world, while condemning violence in the name of religion.

More than 100 delegations from about 60 countries met from 14-15 September at the VII Congress of Leaders of World and Traditional Religions, which was held in Nur-Sultan, the Kazakh capital city.

At the end of the 2-day Congress, most delegates adopted a declaration, containing principles to be disseminated at regional and national levels, for consideration in all political decisions, legislative norms, educational programs, and mass media in all interested countries.

A pledge to work towards a better world

The declaration, which will also be distributed as an official document of the 77th session of the UN General Assembly, reflects efforts towards promoting interreligious dialogue and fostering inter-civilization cooperation.

In it, the participants express their shared desire for a just, peaceful, secure and prosperous world, affirming the importance of shared values in the spiritual and social development of mankind.

They also recognize the necessity of countering and overcoming intolerance, xenophobia, discrimination and conflicts based on ethnic, religious and cultural differences, as well as extremism, radicalism and terrorism, which lead to religious persecution and the undermining of human life and dignity.

More so, they express concern about the global increase in the number of migrants and refugees in need of humanitarian assistance and recognize the importance of addressing global challenges including climate change, hunger, poverty, among others, in our post-pandemic world.

They also highlight the urgent need for spiritual and political leaders to join efforts to confront the challenges of the world.

Against conflicts and wars

In the document consisting of a preamble and 35 paragraphs, the participants further pledged to continue the work of the Congress for the benefit of peace and dialogue between cultures and civilizations.

The participants spoke against the unleashing of military conflict that create hotspots of tension and confrontation and impair international relations, and noted that all forms of violence and wars, whatever their goals, “have nothing to do with true religion and must be rejected in the strongest possible terms.”

The Congress called upon world leaders to abandon all aggressive and destructive rhetoric that leads to the destabilization of the world, and to cease from conflict and bloodshed, urging them to “develop dialogue in the name of friendship, solidarity and peaceful coexistence.”

The document also encouraged acts of mercy and compassion, calling for assistance for regions affected by conflict, natural and man-made disasters.

The declaration further goes on to recognize the importance and value of the Document on Human Fraternity signed by Pope Francis and the Grand Imam of Al-Azhar, Ahmad Al-Tayyeb, in February 2019, and the Makkah Declaration, signed in Mecca on May 2019, which call “for peace, dialogue, mutual understanding and mutual respect among believers for the common good.”

Proceeding from the fact that God created all people equal regardless of race, religion, ethnicity and social status, the participants uphold the value of tolerance, respect and mutual understanding that underpin all religious teaching.

In this regard, they note that pluralism and differences in religion, skin color, gender, race and language are expressions of the wisdom of God’s will in creation, and “any incident of coercion to a particular religion and religious doctrine is unacceptable.”

The document, thus, calls for the support of initiatives to implement interreligious and interdenominational dialogue “for the sake of building social justice and solidarity for all peoples.”

The rest of the declaration touched on other issues, including highlighting the importance of strengthening the institution of the family and protecting the rights and dignity of women, among others.

The document concludes by acknowledging the Republic of Kazakhstan for its role as “an authoritative and global center of intercivilizational, interreligious and interfaith dialogue” and an indication of the desire to hold the 8th Congress in 2025 in Nur-Sultan.

Pope thanks Our Lady for protection on Kazakhstan visit