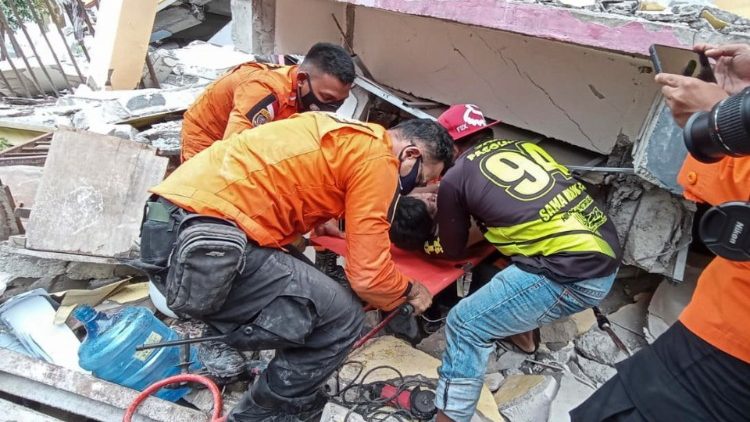 Thousands of frightened residents fled their homes for higher ground in the darkness when a magnitude 6.2-quake struck Indonesia’s West Sulawesi province shortly before 1.30 a.m, 15 January. The U.S. Geological Survey located the epicentre some 36 kilometres (22 miles) south of Mamuju district, at a depth of 18 kilometres (11 miles).

The quake and aftershocks injured hundreds and trapped many under the rubble, with authorities warning of more quakes that could trigger a tsunami. More than 300 homes and two hotels were damaged and a hospital was flattened, the office of a regional governor said. The tremors set off three landslides, disrupted electricity supplies and communication links, and damaged bridges linking to regional hubs, such as the city of Makassar.

The Indonesian disaster agency said the death toll could climb as rescuers retrieve bodies trapped under collapsed homes and buildings in Majene and in the adjoining Mamuju district. The agency said about 15,000 people were being housed in temporary shelters.

Indonesia’s Meteorology and Geophysics Agency (BMKG) told reporters that there had been at least 26 aftershocks, with Friday’s quake preceded by a quake of 5.9 magnitude tremor on Thursday.

President Joko Widodo offered condolences to the victims in a video statement, urging people to stay calm and calling on authorities to step up search efforts.

Straddling the so-called Pacific Ring of Fire, the Indonesia archipelago is regularly hit by earthquakes and volcano eruptions. In 2018, a devastating 7.4-magnitude quake and subsequent tsunami struck the city of Palu, in Sulawesi, killing more than 4,000 people. Earlier, on 26 December 2004, a 9.1-magnitude quake off the north of Sumatra island triggered a devastating tsunami that killed 230,000 people in a dozen countries, most of them in Indonesia.