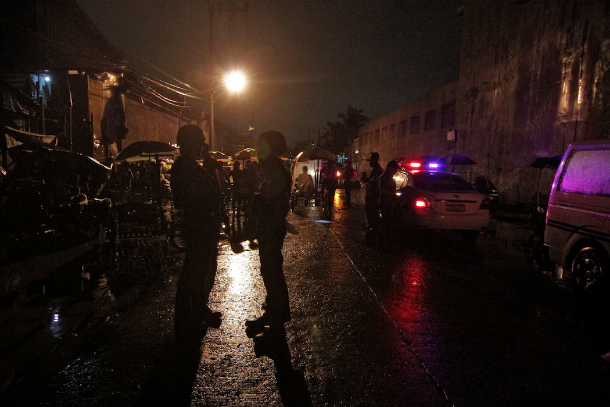 Nanette Castillo lets fly a series of curses while watching Philippine President Rodrigo Duterte claiming on television that his only “sins” are extrajudicial killings.Normita Lopez, a volunteer for the group Rise Up for Life and Rights, stood up in anger as Duterte’s aides took turns saying that the president was only joking.”You call my son’s death a joke? How many thousands of jokes do we need to say enough?” Lopez spat as she broke into tears.Lopez is one of several Filipinos who have filed a suit with the International Criminal Court on behalf of children killed by police during Duterte’s two-year rule.Official government figures place the dead from authorized police operations at close to 5,000.

Castillo’s son, Aldrin, was included among the more than 20,000 others slain by still unknown parties, often tagged as vigilantes by the government.Both women said each word Duterte utters to justify or encourage extrajudicial killings rips at barely healed emotional and even mental wounds.”They’re boasts, masquerading as jokes,” said Aldrin’s mother.Duterte, who claims to be above corruption and nepotism, once said families of the thousands slain in his war against drugs would never get justice while he rules the Philippines.Aside from welcoming the growing numbers of bereaved families joining the group Rise Up, which helps families of victims navigate the labyrinth of the Philippine justice system, Lopez said a perverse hope nudges at the rage that keeps her awake till the wee hours of each morning.”Every time I hear him, I imagine a rope growing longer, snaking around his neck,” said Lopez. “I promised my son, Djastin, I will be around to see the mastermind of his murder punished.”Bishop Pablo Virgilio David of Kalookan, who oversees a diocese with one of the highest number of drug-war deaths, welcomed Duterte’s “public confession.”But while God will always be magnanimous with his forgiveness, the prelate pointed out that absolution could only come about with contrition and penance on the part of sinners. No sliver of light in this regard can be seen on the part of Duterte.The president’s aides insisted he has not ordered a single extrajudicial killing. But in words and actions, he has encouraged the bloodlust.After an overnight orgy of deaths that took more than 30 lives in Bulacan, a province just 50 kilometers north of the capital, Duterte told police the more they killed, the more it would make him happy.He has reinstated and even promoted police officers accused of murder, and pledged to pardon those convicted by the courts.The president has said he only approves of policemen killing to defend themselves. But investigations by news outlets, lawyers groups, and human rights organizations have blown holes through the police claim that all the slain suspects died fighting back.The killings during Duterte’s drug war fit into the extrajudicial killing category, as these are accompanied by public vilification of targets, secrecy and efforts to stymie investigation, and attacks on human rights workers.Families are often deprived of the most basic police reports, according to the Integrated Bar of the Philippines. Authorities also ignore the law mandating automatic probes for operations that result in death.Bishop David pointed out that there has been little effort to find the culprits in vigilante killings.”They enter narrow street alleys, pass by police stations and village halls in groups of four to 14. But they are neither seen nor apprehended by the police,” noted the prelate. “How many of these deaths are really being investigated? How many have been resolved?”For United Nations special rapporteur Agnes Callamard, Duterte’s remarks target the rule of law.”Translation: my only sin is imposing unthinkable sufferings on 1,000s of vulnerable families, emboldening corrupt policing, destroying rule of law,” wrote Callamard on Twitter.Duterte’s “jokes” seep into law enforcement agencies, cementing a worldview contemptuous of human rights.National Police Director-General Oscar Albayalde shrugged off the outcry against the killings, saying “only two or three percent of those who were challenged” were killed.”That’s a very small percentage,” said Albayalde of the thousands of drug war slain, mostly urban poor folk.To reduce humans into the categories of pests is Duterte’s great crime against humanity. Again and again, he insists — against all medical evidence — that there is no hope for addicts, that they should no longer be seen as human beings but as threats to humanity.His pledge of putting up massive rehabilitation centers lies in shambles, the budget for health services slashed in favor of more weapons of destruction.Under the late dictator Ferdinand Marcos, authorities coined a unique term, “salvaging.” In the parlance of a dictatorship, “salvaging” is “saving society” by killing a person sans due process.Duterte’s foreign affairs secretary, Alan Peter Cayetano, used the term to defend the drug war before the United Nations.If Duterte has his way, by the time he’s done saving the Philippines, the world will be lighting candles for the death of our democracy.Inday Espina-Varona is editor and opinion writer for various publications in Manila.