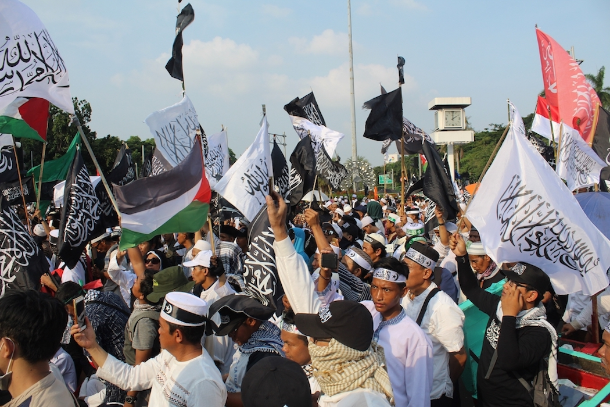 Thousands of conservative Muslims took to the streets of Indonesian capital Jakarta on Nov. 2 to protest the burning of a religious flag by members of Nahdatul Ulama (NU), the country’s largest moderate Islamic organization.An estimated 3,000 people filled a major Jakarta thoroughfare after Friday prayers in a protest organized by the same groups who held a series of protests last year that culminated in the election defeat and jailing of Jakarta’s Christian governor Basuki Tjahaja Purnama for blasphemy.They demanded the police thoroughly investigate the burning of the flag, which contained religious writing, during National Santri Day celebrations in Garut, West Java, on Oct. 22 by members of Banser, the NU’s youth wing.Banser later apologised, saying that they thought the flag belonged to Hizbut Tahrir Indonesia (HTI), a Muslim group seeking a global caliphate, which was banned by the government last year.Abdul Hamid, a protester from Banten from outside Jakarta, said the burning of the flag cannot be justified for any reason. “We want to raise awareness, including among Muslims, to respect Islam, to respect God,” he said of the reasons why he was protesting.  Hidden agendaThe protest, which began at Istiqlal Mosque in central Jakarta and headed to the state palace, was said to be politically motivated, since the police had already said it was investigating the flag burning.West Java Police have named three suspects, who face a possible three-week jail term.According to Haedar Nasir, chairman of Muhhamadiyah, Indonesia’s second largest mainstream Muslim organization, the controversy should have ended with Banser’s apology. “There should be no attempt to capitalize on this case by any party,” he said. Deputy national police chief Ari Dono Sukamto also questioned the motive behind the protest. “We are conducting legal proceedings, so what is the reason to hold rallies?” he said.Raja Juli Antoni, general secretary of the Indonesia Solidarity Party which supports President Joko Widod, suspected there was a political motive for the rally as Widodo had been strengthening his ties with moderate Muslim groups.”We suspect that this is a political tactic carried out by certain groups who intentionally take advantage of religious issues for political purposes,” he said.Indonesia will hold presidential and parliamentary elections next April, where Widodo, who is seeking a second term, has appointed Ma’ruf Amin, an NU cleric and former chairman of Indonesian Ulema Council, as his running mate

People must choose: path toward holiness or nothing, pope says