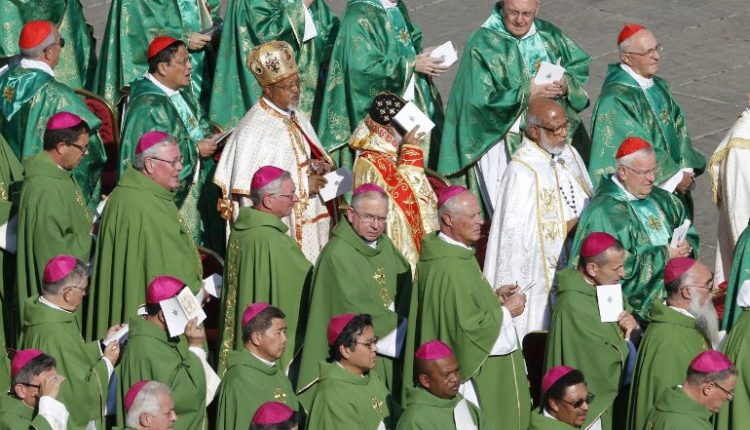 VATICAN CITY — Pope Francis opened a month-long worldwide meeting of Catholic bishops Oct. 3 by exhorting the hundreds of prelates taking part to guard against “falling into moralistic or elitist postures” as they discuss the needs of young people today.

During his homily for the opening Mass of the Synod of Bishops, which will continue through Oct. 28, the pontiff also asked the prelates to listen to one another “sincerely and prayerfully, as free as possible from prejudice and conditioning.”

Francis said the bishops should seek “to enter into communion with the diverse situations that the People of God experience.” Such a venture, he said, “protects us from the lure of abstract ideologies that never touch the realities of our people.”

“Hope challenges us, moves us and shatters that conformism which says, ‘it’s always been done like this,'” said the pope. “Hope asks us to get up and look directly into the eyes of young people and see their situations.”

Francis’ remarks were part of a short and direct 11-minute homily during a Mass with thousands in St. Peter’s Square for the opening of the 15th ordinary general assembly of the Synod.

During the four-week gathering, 267 bishop and priest members are being joined in Rome by 72 lay auditors and eight delegates from other Christian denominations to consider the theme “Young people, the faith, and vocational discernment.”

This is the third Synod of Francis’ five-year papacy, following gatherings in 2014 and 2015 that focused on issues of family life.

The earlier meetings resulted in the 2016 apostolic exhortation Amoris Laetitia, which  asked Catholic pastors around the world to let their lives become “wonderfully complicated” in an effort to see God’s grace at work, even in situations which might be seen as contrary to doctrinal norms.

The 2018 Synod has been marked by a lengthy period of preparation, which included two preliminary meetings of young people in Rome and release of an online questionnaire for youth around the world to indicate the issues important to them.

Thirty-four young people are taking part in the gathering as experts or auditors, and will be able to participate in the discussions but unable to vote on the meeting’s expected final document.

The October Synod is also marked by the fact that two bishops from mainland China are taking part for the first time since the beginning of the Synod process in 1967, thanks to the recent “provisional agreement” between the Vatican and Beijing that ended a decades-long dispute over appointment of Catholic bishops in the Communist country.

During his homily, Francis mentioned those two bishops — Joseph Guo Jincai of Chengde and John Baptist Yang Xiao-ting of Yan’an — and said that “the communion of the entire episcopate with the Successor of Peter is yet more visible thanks to their presence.”

The pontiff also told the prelates that young people “will be capable of prophecy and vision to the extent that we, who are already adult or elderly, can dream and thus be infectious in sharing those dreams and hopes that we carry in our hearts.”

The pope asked that the Holy Spirit might “grant us the grace to be synodal Fathers anointed with the gift of dreaming and of hoping.”

“May the Spirit give us the grace to be a memory that is diligent, living and effective, that does not allow itself from one generation to the next to be extinguished or crushed by the prophets of doom and misfortune, by our own shortcomings, mistakes and sins,” Francis asked.

The first session of the Synod is to open in the afternoon of Oct. 3, when Francis is due to again address the members taking part in the gathering. General sessions are expected to continue for about two weeks, after which time the members will meet in small groups divided by working language.

Those taking part include 50 cardinals, 145 bishops and archbishops, 37 auxiliary bishops, and ten priests and brothers from religious orders.

Francis ended his homily Oct. 3 by noting that the last message released from the 1962-65 Second Vatican Council was directed at the young people of that time, telling the Synod prelates that the message “will do us much good” if considered in the light of 19th century German poet Friedrich Hölderlin’s line: “May the man hold fast to what the child has promised.”

“We exhort you to open your hearts to the dimensions of the world, to heed the appeal of your brothers, to place your youthful energies at their service,” the bishops of the council told the young people of the 1960s.

“Fight against all egoism,” they advised. “Refuse to give free course to the instincts of violence and hatred which beget wars and all their train of miseries. Be generous, pure, respectful and sincere, and build in enthusiasm a better world than your elders had.”

After brief embrace with prelates, activists clash with Italian police