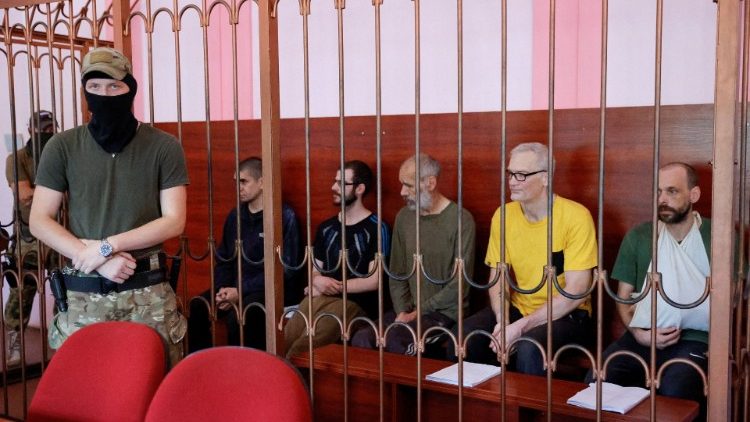 Five men, including three from Britain, have denied being mercenaries fighting with Ukrainian forces against Russia in a Russian proxy court in eastern Ukraine. The trial in the so-called Donetsk People’s Republic trial comes amid reports of fighting and massive disappearances.

John Harding, Dylan Healy, and Andrew Hill appeared in court in the so-called Donetsk People’s Republic amid international concerns that at least some detainees may be executed.

Russian sources say, Harding, who fought with Ukrainian forces, and a Swede and Croat could face death sentences. Recently the same court already sentenced two British men and a Moroccan citizen to death. However, the executions have not yet been carried out.

There was some hope for American prisoners in Russia: Brittney Griner, the US basketball star, appealed her conviction on drug smuggling charges.

Diplomats suggested that Moscow appears willing to discuss a possible prisoner swap that would include Griner and other Americans.

And a headquarters of the Wagner group of Russian mercenaries was reportedly targeted by Ukrainian troops.

Wagner has been linked to war crimes. But the extent of the damage to its headwaters in Ukraine’s eastern Luhansk region wasn’t immediately apparent.

The strike emerged amid reports that at least hundreds of Ukrainian civilians, mainly men with military experience or fighting age, have disappeared since the Russian invasion began nearly six months ago.

In several cases, they were held by Russian troops or allied forces in camps, basements, or police stations in Russian-occupied areas of Ukraine. Other deportees ended up incarcerated in Russia.

In interviews with The New York Times newspaper, detainees recalled how they were moved from one place to another, beaten, and subjected to electrical shocks under interrogation.

Others were shot, they said. It remained unclear Tuesday how many people have been sent to Russian jails, though the United Nations said it documented 287 cases of “enforced disappearances and arbitrary detentions.”

The UN agrees that the actual figure is almost certainly more as battles continue in several areas of Ukraine.

That already has an economic impact, with factories reportedly moving west, away from Russian bombs, causing a land rush.