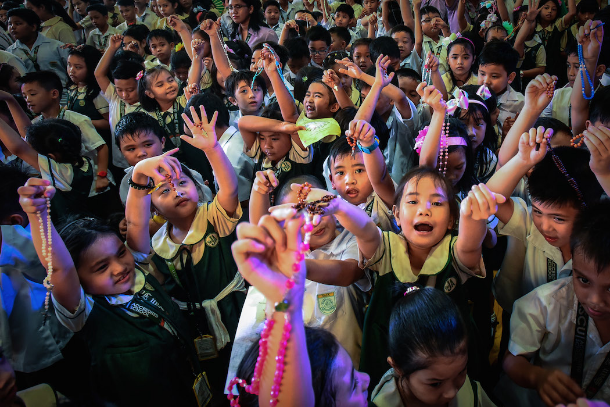 More than a thousand Filipino children in a Manila suburb prayed for God’s intervention on Oct. 18 to “heal the country” of its ills and end a campaign of killings targeting drug suspects.One of the children said praying the rosary was their response to a crisis. “We ask for an end to the atrocities currently taking place,” said 11-year-old Jocelyn Garganta. Jocelyn lost her father to the government’s “total war” on drugs that has killed thousands of suspected drug users and dealers over the past two years.She said unidentified gunmen also killed her grandfather that same fateful day in August last year. For Jocelyn, the rosary is her “direct connection” to God through the Virgin Mary, who, she believes, listens to prayers and intercedes on people’s behalf.”I pray that the killings would stop,” said the girl who now lives with her grandmother after her two siblings died, one from sickness, the other in an accident.Bishop Pablo Virgilio David of Kalookan said the number of orphans created by the drug war is surging. And in any war “children suffer the most,” he said. “[People] don’t understand what’s happening,” said Bishop David whose diocese on the outskirts of the Philippine capital has become a major drug war battleground.On Oct. 18, the prelate led children in praying the rosary as part of the global “One Million Children Praying the Rosary Campaign.”It is a prayer initiative of the international pastoral non-profit group, Aid to the Church in Need, to gather young people from around the world to pray the rosary for world peace.Now in its third year, more than 80 countries participated in the event, which was joined in the Philippines by children from 1,200 parishes and 700 schools in 41 dioceses.Jonathan Luciano, director of Aid to the Church in Need in the Philippines, said the gathering aimed to show solidarity with children in other parts of the world “who needed help more than we do.””This means a lot especially to those who have been suffering very much because of persecution and oppression,” he said. To advance its cause, the children also donated a portion of their allowances to help fund projects for kids in Iraq, Syria, and Africa