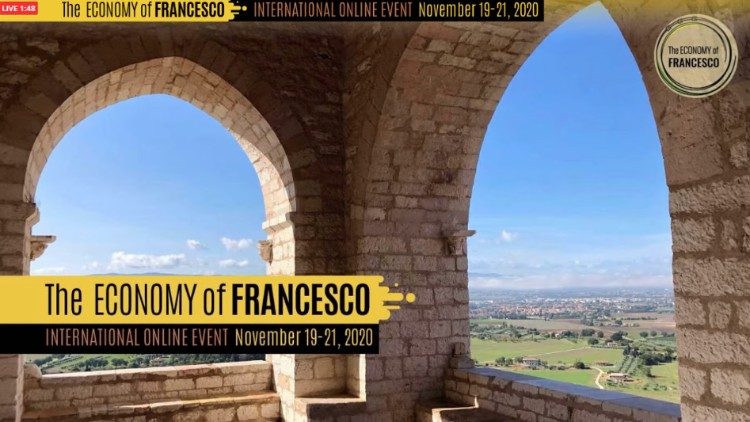 “The Economy of Francesco” online event continued into its second day on Friday, with participants focusing on how questions of finance, economics, sociology, and ecology are all interrelated.

As the live-streamed event got started from the Italian town of Assisi on Friday, organizers expressed surprise over how the event’s first day had generated over 48,000 views on YouTube.

Some 2,000 young economists and entrepreneurs were signed up as direct participants.

The first session of “The Economy of Francesco” explored several social aspects of the global economy and how they could be improved, while seeking inspiration from St. Francis of Assisi.

From producing to caring

A conference entitled “Generativity, Relational Good, and Civil Economy” opened with Professor Mauro Magatti, a sociologist and economist at Catholic University of the Sacred Heart in Milan, Italy.

Prof. Magatti said the current economic system is based on productivity and the person’s status as a consumer, rather than as a human being.

He urged younger generations to move away from this standard toward the creation of economic indicators which take into account the idea of “generativity”. An economy with this expanded parameter would also care about what is produced and its effects on all of humanity.

Prof. Magatti said this requires four transitions: A formative transition which helps people grow; an organizational transition which can recognize people’s abilities and ideas without constraining them; a communitarian transition—known in the Church as the principle of subsidiarity—to create open communities that seek out future paths; an environmental transition which links up generations and all Creation.

“A generative economy reopens a future which had seemed closed,” he concluded.

Another speaker, Leonardo Becchetti, an economist at Rome’s Tor Vergata University, expanded on this idea, focusing on its effects on political economy.

A “generative economy”, he said, means moving beyond a two-pronged approach to economics, whose center is the market and institutions, to one which also pays attention to “active citizenship of voting with our pocketbook” and “responsible business activity”. He said such a shift would allow an individual to find meaning within the economic system.

“Generativity,” said Prof. Becchetti, “is the best way to create meaning in individual life and make it flourish.”

The keynote speaker for the event’s second day was Muhammad Yunus, a Bangladeshi economist and social entrepreneur.

The 2006 Nobel Peace Prize laureate developed the idea of microfinance, which gives low-income individuals access to small business loans to pursue their dreams.

Speaking to participants in The Economy of Francesco, Prof. Yunus said the goal of microfinance is “not to make money for yourself but to solve people’s problems.”

In the same vein, he offered several criticisms of the global economic system. He said the Covid-19 pandemic has thrust its main defect into the limelight: maximizing profits for those on the top.

“We have built a world where 1 percent of the population owns 99 percent of all wealth,” he said.

Pain of the poor

Prof. Yunus pointed out that with the onset of the pandemic those people who barely earned a living were suddenly thrust into poverty from their perch on the margin.

Prof. Yunus said many people yearn to return to a pre-pandemic world.

“Why would we want to return?” he asked the young economists, entrepreneurs, and changemakers participating in The Economy of Francesco.

The second day of the event concluded with a snapshot of a social ministry in Uganda, as an example of a caring economy based on solidarity.

Miriam Kiwumulo Kyalimpa, the founder and director of the foundation, said the organization helps women by granting small loans to kickstart their business ideas.

Since many women are unable to take on such risks alone, they are encouraged to form groups and work together to lift themselves out of poverty and destitution.

“We want to teach them how to work,” she said. “They have the capacity. All they need is a source of capital.”