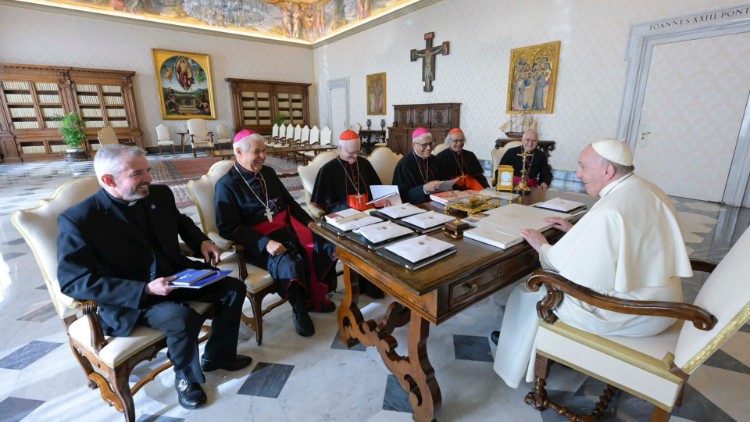 The Latin American Episcopal Council (CELAM) presents a document resulting from reflections at the ecclesial assembly held over a year ago in Mexico City. Archbishop Vidarte of Trujillo says that from now on, it will no longer be possible to neglect listening to the voice of God’s people.

One year after the Ecclesial Assembly of Latin America was held in Mexico City, the presidency of the Latin American and Caribbean Bishops’ Council (CELAM) presented the document titled “Toward a Synodal Church Going Forth into the Periphery,” whose reflections and pastoral proposals were shared with journalists this afternoon at the headquarters of the Dicastery for Communication.

Arch. Vidarte: The Church can no longer disregard the voice of God’s people

The presentation included a video and a series of testimonies in the presence of Oscar Elizalde, director of CELAM’s Center for Communication and consultant to the Dicastery for Communication.

Monsignor Miguel Cabrejos Vidarte, archbishop of Trujillo, Peru, and president of CELAM, stressed that “the unprecedented aspect of the first Ecclesial Assembly lies in having courageously and prophetically marked a point of discontinuity, because from now on, it will no longer be possible to avoid the participation of the people of God in the various decisions of the Church.”

According to the prelate, co-responsibility is fostered but at the same time poses challenges, such as living coherently between saying and doing, adequately reading the signs of the times, moving from listening to dialogue and from dialogue to discernment to inspire action. He added that “the Church must not grow weary, but must build bridges, break down walls, integrate diversity, promote the culture of encounter and dialogue, educate in forgiveness and reconciliation, a sense of justice, the repudiation of violence and the courage of peace.”

Presentation of the document

Stimulating a pastoral and permanent conversion of the Church

The President of the Confederation of Latin American Religious, Sister Liliana Franco Echeverri, spoke via live streaming and reflected on the importance of the Ecclesial Assembly for religious life on the continent.

Then, historian and theologian Gianni La Bella spoke on the theme, “the signs of the times that challenge and encourage the Latin American and Caribbean Church”. He said that the document aims to offer practical suggestions for re-reading and actualizing the contents and spirit of the Aparecida Conference, grasping its legacy within the framework of a path whose sole objective is to stimulate a pastoral and permanent conversion of the Church.

Expression of a plural desire for an outgoing Church

The 146-page document is structured in several parts; “Signs of the times that challenge and encourage us,” “A synodal and missionary Church at the service of the fullness of life,” and pastoral proposals and lines of action.

The text contributes to the reflection and journey of communities in Latin America, with the certainty that “we are all missionary disciples on the move.” The Latin American Bishops emphasized that “it is an expression of the plural desire for an outgoing Church because it gathers the contributions of the different vocations and ministries of the People of God who have participated as faithful missionary disciples in the discernment of pastoral challenges and orientations; for this reason, it is also a prophetic expression.”