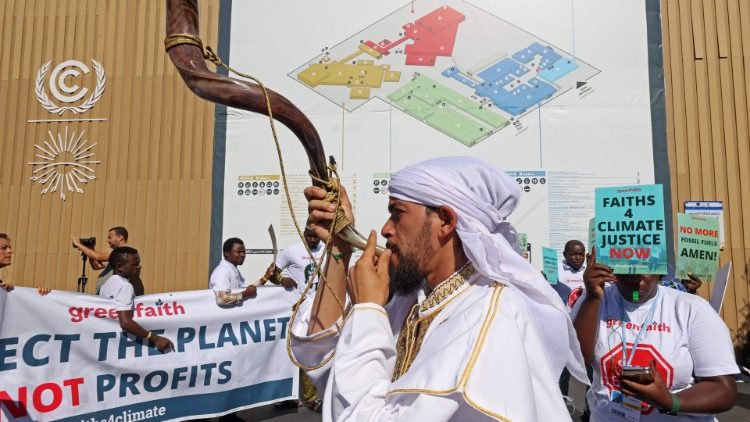 Lucy Esipila reflects on the presence of Caritas Africa at the Sharm el-Sheikh Climate Change Conference.

Policy and Advocacy Officer at Caritas Africa, Lucy Esipila is attending the Sharm el-Sheikh Climate Change Conference (COP 27). She shared some of Caritas Africa’s reflections with Vatican News regarding the voice of the Church at COP 27.

COP 27 is the 27th United Nations Climate Change Conference that is taking place in Sharm-El Sheikh, Egypt, between 6 November and 18 November. The forum popularly referred to as (COP) – Conference of Parties is one of the most important climate-related conferences on the planet.

In her reflection, Lucy Esipila maintains that for Caritas Africa and other Catholic organisations at COP 27, Climate change is already a lived reality for millions across Africa.

“The effects of extreme weather events and climate change are now being felt in different corners of the globe. In the horn and east of Africa, millions of people are going to bed hungry due to the food crisis resulting from four failed consecutive rainy seasons. In the Sahel, increased desertification threatens the livelihood systems of communities. In other parts of Africa, communities are forced to adapt to economic and non-economic losses and damages from the effects of floods, cyclones and drought. Additionally, the war in Ukraine served as a wakeup call on the need to transform our food system because of the dependency on synthetic fertilisers from Russia, and the energy crisis, which disrupted supply chains globally,” she said.

Participation at COP 27 is vital for Catholic actors.

“For African Catholic actors, COP 27 is inimitable because it is hosted in Africa and, for the first time, the Holy See is participating as a State Party to both the Convention and the Paris Agreement,” She said and adding, “Caritas Africa is a network of 46 National Catholic Charity organisations in the south of the Sahara. The Local Caritas work with local communities on climate change mitigation and adaptation efforts. Therefore, the Caritas Africa Secretariat and member organisations from Caritas Zambia and Caritas Malawi participated in Climate negotiations to amplify the voices of the local communities they serve,” said Esipila.

Climate activists at the COP27 Summit in Sharm El-Sheikh.

Caritas Africa would like to see recognised the role of Agriculture in the climate system through what is known as the Koronivia Joint Work on Agriculture.

“At the local level, Caritas organisations in Africa promote agroecological principles with an aim of promoting agriculture that has a positive or neutral impact on the environment. This is done through a holistic food systems approach, paying attention to the food system from processing to production. Based on experiences from the ground, Caritas Africa joined other actors in the Caritas Internationalis Confederation, and the wider Catholic community to call for the inclusion of Food Systems, recognition on indigenous knowledge, and the promotion of agroecology in the final text,” she said.

The tragic effects of climate loss and damage

At COP 27, Mrs Chimwemwe Sakunda, the National Coordinator of the Catholic Development Commission in Malawi (CADECOM), shared experiences of climate loss and damage in Malawi.

In climate change parlance, loss and damage refer to economic costs and non-economic losses incurred by countries as a result of climate fuelled floods, famine or rising sea levels.

For a country such as Malawi, loss of property, farmland, and livelihoods due to floods or the effects of Cyclone Idai bring to the fore the full spectrum of loss and damage, including difficult-to-quantify loss such as psychological or mental distress.

Esipila continued, “Currently financing towards climate change related initiatives have been channelled towards decarbonisation, for example, the shift from using petroleum and gas to adopting solar, wind energy and biogas. Other investments have been directed towards helping local communities to adapt to climate impacts. Notably, there is no climate finance to address losses from extreme weather events such as damaged infrastructure, property, and cultural assets,” she said.

There is concern that the G7 is pushing to launch a Global Shield insurance initiative. With this scheme, “for instance, Germany will provide €170 million ($172 million) to help low-income countries to reconstruct following climate related climate. Some have argued that insurance is one of the many ways that the rich countries will use to avoid setting up a loss and damage fund,” she explained.

Church leaders are on record saying that the climate crisis is fundamentally an issue of justice and peace. There can be no peace if polluters continue to profit from climate destruction whilst the people suffer.

For Esipila, “As world leaders debate on the climate crisis, Caritas Africa would like to remind them of the words of Pope Francis on the ecological debt owed by the North to Southern Countries. Thus, international solidarity is crucial at this time. Caritas Africa hopes that the outcome document from COP 27 will demonstrate a just transition by sending a signal to financial institutions to finance a number of initiatives for the benefit of Africa. These include, amongst others: Upscaling agroecology towards a sustainable food system, facilitating access to finance for smallholder farmers and channelling investments towards renewable energy sources.”

G20: 5 Ps to guide the path to integral development