Cardinal Erdő: The Eucharistic Congress is a symbol of hope 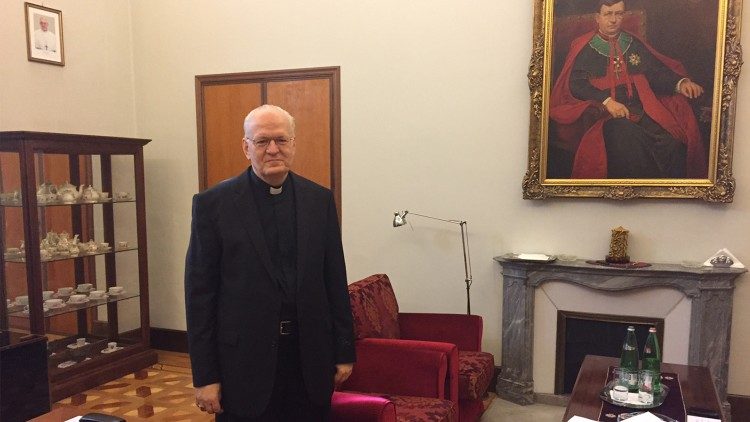 On the eve of the start of the International Eucharistic Congress in Budapest, Hungary, Cardinal Péter Erdő describes the joining of leaders of different Churches, along with the visit of Pope Francis, as a sign of hope for the unity of the Church.

“The arrival of the Holy Father will be a great sign of hope, even after a year and a half of pandemic,” Cardinal Péter Erdő, Archbishop of Esztergom-Budapest and primate of the Catholic Church of Hungary, told Vatican News, as the Hungarian Church and the people of the country await the arrival of Pope Francis.

Pope Francis will be in Budapest, Hungary on 12 September for the closure of the 52nd International Eucharistic Congress, which will bring together representatives of all the world’s Churches, including those from countries in conflict. The Congress opens tomorrow and runs until 12 September. Postponed last year due to Covid restrictions, the Congress will be officially concluded by Pope Francis with a Mass celebrated in Heroes’ Square in the Hungarian capital. After the Mass, the Pope will travel to Slovakia.

The opening Mass of the Eucharistic Congress will be celebrated by Cardinal Angelo Bagnasco.

Cardinal Erdő went on to describe the significance of having Pope Francis visit Hungary: “It will be a great sign of hope, after a year and a half of pandemic. A sign of openness, of rebirth, and also a sign that divine providence does not leave us alone. It will therefore be a joyful event”.

The logo for the event represents a chalice surmounted by the host, inside which is engraved the cross, the symbol of Christ’s sacrifice celebrated on the altar. Anticipated by conferences and symposia, the congress “will also be an opportunity to recall the Christian roots of Europe and the ancient unity between the Churches of East and West”, stressed Cardinal Erdő.

Cardinal Erdő then spoke about a theological symposium that is currently taking place near Budapest. He explained that there are about 300 participants. During the opening interventions, he said, “theologian Monsignor Pierangelo Sequeri spoke about the Eucharist as the source of Christian life, which echoes the motto of the Congress ‘All my sources are in You’. Then, he continued, Cameroonian Bishop Joseph-Marie Ndi-Okalla spoke about the specificities of the Eucharistic liturgy in Africa. He did not speak about it on a ‘folkloristic level’, but on the theological aspects that the African liturgy emphasises in a special way. Truly a deepening of our faith in the Eucharist.

With all the different ecumenical representatives, “it will be an opportunity to pray for the unity of the Church”, the Cardinal added.

Working to include all

Finally, Cardinal Erdő spoke of the moments dedicated to the Roma minority that will take place during the Eucharistic Congress. He explained that in 2008, with the approval of the Bishops’ Conference, the entire Bible was published in the Romani language, which is the most widely spoken language among the Roma in Europe. This language did not, however, have a liturgical text for Mass, he explained. “Encouraged by Pope Francis, we started to prepare a translation and managed to arrive at a mature text of the Ordinary of the Mass that will be sung in this language”. Some musicians have composed beautiful music based on the musical traditions of Roma peoples throughout Europe, suitable for the Mass. The Cardinal concluded expressing his hope that this time “we will be able to emphasise full communion with them also around the altar of the Lord”.

Pope: Commitment to peace needed more than ever