Card. O’Malley: Church leaders must listen to the voices of victims of abuse 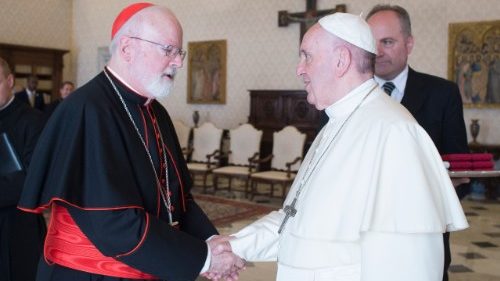 The safeguard and the protection of minors from clerical sexual abuse has become an urgent priority for the Catholic Church that is increasingly under pressure to give a credible and robust response to victims, their families, their communities and to all Catholic faithful.

Headed by Cardinal Sean O’Malley, its mandate is to propose the most opportune initiatives for protecting minors and vulnerable adults in order that the Church may do everything possible to ensure that crimes such as those which have occurred are no longer repeated.

It does so by uniting its efforts to those of other institutions and to bishops’ conferences across the world and producing tools like guidelines, good-practices and formation courses for Church leadership.

A press release was published on Sunday at the conclusion of the Commission’s 9th Plenary Assembly that took place in the Vatican.

Cardinal O’Malley spoke to Vatican News’ Sergio Centofanti about the most urgent and significant issues Commission members focused on during the Assembly.

Asked whether, given the present situation, is the Church really listening to survivors and learning from them, Cardinal O’Malley said “recent events in the Church have us all focused on the urgent need for a clear response on the part of the Church for the sexual abuse of minors”.

The importance of listening to survivors

Of course, he pointed out, one of the Commissions’ tasks and responsibilities is to listen to survivors: “we are always anxious to have the testimony of survivors to inform our deliberations and judgment” and as we often have, he said “we began our meeting listening to two testimonies”.

One priority O’Malley singled out is the work Commission members do to address newly appointed bishops.

“Every year, he said, we make a real effort to bring the voices of the survivors to church leadership. It is crucial if people are going to have an understanding of how important it is for the Church to respond quickly and correctly any time a situation of abuse may arise”.

O’Malley also pointed out that if the Church is unable to respond wholeheartedly and make this a priority, all its other activities are all going to suffer.

The Cardinal also explained how the Commission has been tireless in taking the message of safeguarding throughout the world.

In some continents, he said, it is a new theme and in some areas the Church is under-resourced, so the Commission is planning new conferences in places like Brazil, Colombia and Poland and working on guidelines and best practices as well as developing auditing instruments to be used by Bishops Conferences to measure their implementation and compliance.

Cardinal O’Malley commented on the positive feedback the Commission is receiving regarding education and formation and of a series of initiatives to set up advisory panels in different continents.

Role of the Commission

Cardinal O’Malley agreed there is much confusion – in the public – about the Commission’s role and mandate and explained it is not a body that deals with past cases or particular situations of abuse.

“We are trying to change the future so it will not be a repeat of the sad history, and we do that making recommendations to the Holy Father and promoting best practices and guidelines that take into account safeguarding, prevention, educational programs that address the formation of leadership so that bishops, priests and religious will be equipped to be able to respond and put the safeguarding of children and the pastoral care of victims as their priority” he said.

In English we have a saying, O’Malley confided: “an ounce of prevention is worth a pound of cure!”