Bishops discuss hotline devoted to collecting complaints against them 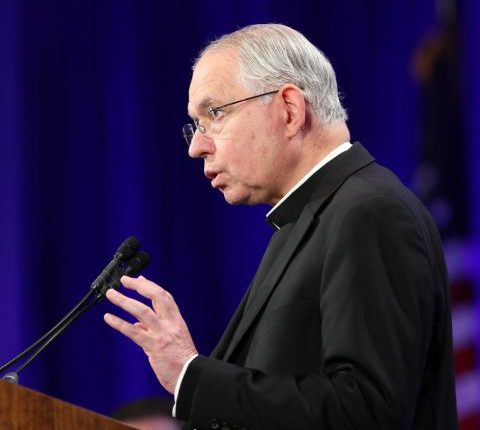 BALTIMORE — The U.S. bishops discussed the establishment of a hotline devoted to collecting complaints about a bishop’s alleged abuse of a minor, sexual harassment or misconduct involving adults, or his reported failure to respond adequately to those types of complaints.

Los Angeles Archbishop José Gomez said the “third-party system” that would collect complaints specifically involving bishops was already approved by the bishops’ Administrative Committee during its meeting on Sept. 19.

“With this new system, we are trying to address problems that some people have. Right now they have no clear avenue to report allegations or complaints against bishops,” he told bishops gathered Nov. 13 for the second day of the U.S. Conference of Catholic Bishops’ fall meeting in Baltimore.

“In light of recent events, we’re now talking about complaints against bishops,” said Gomez, vice president of the bishops’ conference.

“The practical issue is this: If the faithful send a complaint about a bishop to a diocese, understandably they might be concerned how that complaint might be handled,” he said. “Some people may decide to complain to police or civil authorities and we certainly encourage them to do this when the complaint involves sexual abuse of a minor.”

Bishops want people to have the confidence that they can complain to a third party, he said.

“With this new third-party reporting mechanism, we are trying to address these issues and provide greater clarity for our people,” he said. “We are not replacing or changing our existing process or avenues for making a complaint. What we are doing is enhancing our current procedures with the aim of making the whole process more effective for our people. We believe this new process will help our people to know where they can submit their complaint.”

The system involves establishing a hotline, accessible by phone or internet, and complaints received via the hotline would then be sent to the apostolic nunciature.

The hotline was set to start in July 2019 with the activation of a special commission to review the complaints and contact civil authorities, if required by law to do so. But that commission is now on hold since the Vatican requested the bishops hold off on voting on several proposals to address sex abuse. However, the third-party reporting system was not part of those proposals.

A Vatican intervention announced Nov. 12 asked the bishops to delay voting on the proposals until they can be reviewed for their conformity to canon law and until after a February meeting at the Vatican for presidents of bishops’ conferences worldwide. Gomez said the hotline would provide a place to gather information and track complaints.

“These systems provide for confidential reporting. When complaints are received, they are directed to compliance officer or another official designated by the organization,” he said. “These systems also provide accountability, giving the person who files a complaint a tracking number that allows them to track status of their complaint.”

Though it would have no role in investigating or evaluating complaints, the new system is designed to provide an effective way for people to make complaints and for such information to be gathered confidentially and then turned over to the appropriate investigators, Gomez said.

“We will have a dedicated toll-free phone number, live operators available to receive complaints in either Spanish or English,” he said. “We will also have a single internet link to receive live complaints and also arrange for dioceses to get a link to the system on their own websites.”

Bishops asked who could make complaints, whether the hotline would accept anonymous information and how much it would cost.

Gomez answered that complaints could come from anybody, anonymous complaints would be accepted and the initial estimates for the system put the cost at $8,500 for the first year with an initial fee of $2,500 to get it started.

“That has to be decided and talked about,” he said.

Retired Bishop Donald Trautman of Erie, Pennsylvania, said he, too, had concerns.

“I think this proposal is very dangerous and unjust,” he said. “It calls for reporting to the apostolic nunciature accusations not investigated, not substantiated, not proven. That’s unjust.”

‘Listen to the heart of our people,’ Sr. Teresa Maya tells US bishops