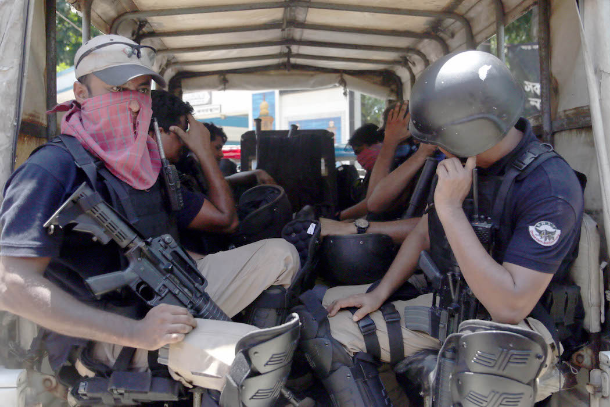 Bangladeshi authorities are on the hunt for suspected Islamic militants in the wake of police raids on suspected militant hideouts where two people were killed.Alleged militants — a male and a female — were killed when police counterterrorism units raided two suspected militant hideouts in Narsingdi district of central Bangladesh on Oct. 16.Police officials also detained two suspected female militants the following day.Police are now hunting for 17 suspected militants believed to have links with those killed or detained, said Abdul Mannan, additional deputy commissioner of Dhaka Metropolitan Police, the Daily Star reported Oct. 19.The raid is part of an ongoing anti-militancy crackdown in Bangladesh, a moderate Muslim-majority South Asian country that has seen a sharp rise in Islamic militancy in recent years.Father Albert T. Rozario, former secretary of Catholic bishops’ Justice and Peace Commission, said the latest crackdown signals that weakened militant networks are trying to regroup.”Militancy is a global phenomenon and it is far from over yet,” Father Rozario told ucanews.com. “Militants are hiding, trying to revive and are changing their tactics to evade security agencies.” Global terror outfitsIslamic militants, pledging allegiance to global terror outfits — the so-called Islamic State and Al-Qaeda — have since 2013 murdered about 50 people including atheist writers, liberal academics, gay activists, religious minorities and foreigners in Bangladesh.In the worst terror attack, five militants murdered 20 people, most of them foreigners, at the Holey Artisan Bakery café in an upmarket diplomatic area of Dhaka on July 1, 2016.In response, law enforcers launched a massive anti-militancy campaign that resulted in more than 50 militants including top leaders being killed and hundreds of suspects being arrested.Father Rozario said that despite such efforts in fighting militancy, Bangladesh has failed to promote a ‘counter ideology‘, nor reach a political consensus denouncing it.  “We have a long tradition of religious harmony, yet there are small groups that back militancy,” said Father Rozario.”Sadly, ruling and opposition parties are yet to reach a consensus that says a strong ‘no’ to militancy,” the priest added.

Broader population rejects militancyDhaka-based security analyst retired Major General Abdur Rashid told ucanews.com that the latest crackdown has multiple revelations, both positive and negative.Rashid noted that since the café attack, security forces have enhanced their skills in combating militancy.  “Now, security officials are able to intercept ‘militancy indicators’ before militants can make any move. That’s why we see now and then militant dens being busted, which was rare before the Holey Artisan attack,” he said.The recent events also show that militancy remains a threat, he said.”Despite all the heavy pressure, militancy hasn’t died out because there is political patronage — backing and protection,” Rashid said. “Although Bangladesh has been a moderate and religiously harmonious nation for a long time, militancy has found roots in the country due to a confluence of politics and religion,” he said.But the broader population rejects militancy, he said.”This is Bangladesh’s biggest strength in resisting militancy,” he added