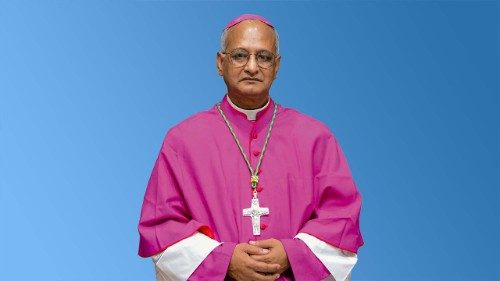 Catholics are praying for Archbishop Costa of Chittagong after he was hospitalized in Dhaka on June 13 with Covid-19.

Archbishop Moses Costa of Chittagong is the first known case among Bangladesh’s senior Catholic clergy to be infected with the novel coronavirus.

The archbishop has been admitted to Square Hospital, Father Leonard Rebeiro, vicar general of the archdiocese said in a statement on Sunday.   He was flown by helicopter from the south-eastern port city of Chittagong to Dhaka on Saturday.

“Dear clergy, religious and lay faithful, Archbishop Moses M. Costa of Chittagong was admitted to Square Hospital with serious ailments on June 13,” Saturday, he said. “During admission, his sample was collected for a Covid-19 test and the report came positive today,” Father Rebeiro said.

The vicar general also made an announcement regarding the archbishop’s condition at the start of a Mass live-streamed on Sunday, the solemn feast of Corpus Christi, or the Most Holy Body and Blood of Christ.

He offered the Mass for the archbishop’s recovery and requested all to pray for him.

The news about Archbishop Costa’s critical condition spread quickly across Bangladesh’s tiny Catholic community, both at home and abroad.  Many expressed their closeness with the archbishop, assuring and inviting prayers for his recovery.

69-year-old Archbishop Costa, a member of the Congregation of Holy Cross, is secretary-general of the Catholic Bishops’ Conference of Bangladesh (CBCB) and he is also chairman of its Commission for Health Care.

Saint Pope John Paul II appointed him Bishop of Dinajpur in 1996 and in 2011 Pope Benedict XVI transferred him to Chittagong. Pope Francis elevated Chittagong Diocese to the rank of archdiocese in 2017, making Bishop Costa its Archbishop.

Bangladesh on Tuesday confirmed 53 more fatalities from COVID-19, bringing the country’s death toll to 1,262.  The number of confirmed infections in the country has totalled more than 94,000.

More than 30 people from the minority Christian community of Bangladesh have been infected and 5 have died in recent weeks.

Chittagong, officially known as Chattogram, is the country’s second-largest city and a major financial hub.  It has seen a rapid increase in coronavirus cases in recent weeks. Its Kotwali area has been marked as a hot spot.

Chittagong Archdiocese was among the first of the eight Catholic dioceses in Bangladesh to issue Covid-19 health guidelines and closed all churches for public services even before the government declared a nationwide shutdown from March 26.

An official from Chittagong Archdiocese told UCA News he was shocked to hear that Archbishop Costa who has been maintaining strict lockdown measures since March, was hit by the virus.

All Chittagong Archdiocesan staff have been advised to stay in isolation at home and to continue working from home, the official added.

Bangladesh began easing Covid-19 restrictions on May 31 and since then all dioceses except Chittagong have opened churches for public worship including Masses.