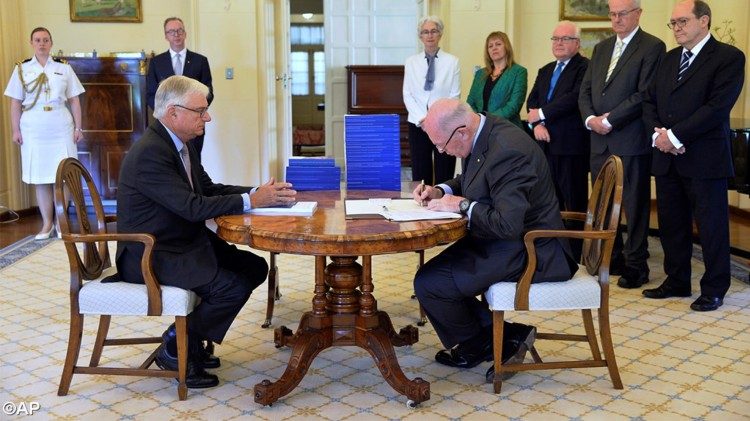 The Catholic Bishops of Australia publish an initial response to the final version of the Church governance review report in the wake of the five-year inquiry of the Royal Commission into Institutional Responses to Child Sexual Abuse..

The Australian Catholic Bishops Conference (ACBC) has published its initial response to the final version of the Report “The Light from the Southern Cross: Promoting Co-Responsible Governance in the Catholic Church in Australia”. The response was presented officially on December 17 by Bishops Conference president Archbishop Mark Coleridge.

The 208-page document is the result of a review of parish and diocese governance commissioned by the ACBC in 2019, following the five-year inquiry of the Royal Commission into Institutional Responses to Child Sexual Abuse that highlighted “systemic failures of governance” in the Church in Australia. In their Final Report in 2017, the Commissioners encouraged the Church “to explore and develop ways in which its structure and practices of governance may be made more accountable, more transparent, more meaningfully consultative and more participatory, including at the diocesan and parish level”

The review was conducted by a special Governance Review Project Team (GRPT), who presented a first draft report in May 2020 and the final version in August. The Bishops reviewed and discussed its 86 recommendations during their last General Assembly in November.

Echoing the observation made by the GRPT Chair, the Australian Bishops stress that the report “is not the final word about Church governance but a significant contribution at this time”: “It acknowledges and builds upon improvements already made across the Church in Australia or within all or many individual dioceses and parishes. It proposes some additional reforms. And it usefully highlights areas where further investigation and change may be warranted as part of the continuing process of renewal in the Church, which is always a work in progress”, the introductory remarks to the 32-page response note.

Bishops also reiterate “their many previous acknowledgements” of the “terrible crimes” against children perpetrated within the Church, the “failures in Church governance that allowed many of these crimes to be repeated and the consequent harm to many victims”, and they renew their commitment “to ensuring this does not recur and to making the Church a child-safe environment”.

At the same time, they point out “signs of hope”: “Despite shame at the past behaviour of some fellow clergy and religious, the vast majority of priests, nuns and brothers have been faithful to their vocations “, they write. “Despite disillusionment over historic child abuse cases and the failure of some Church leaders to respond adequately, many lay faithful maintain their love for God, Christ and the Church, and profess a willingness to be part of the solution”.

In their response, the Bishops group topics and recommendations under six headings: the Nature of the Church; the Mission of the Church; Co-responsibility; Consultation, Advice, Decision; Relationships between entities;  Evolution in Church governance.

The document points out that many of the matters raised in the Report may be better handled by a local bishop or province rather than at the national level. Some of the issues of national relevance will be examined at the Fifth Plenary Counci meeting next year to reflect about the future, the role and relevance of the Catholic Church in Australia.