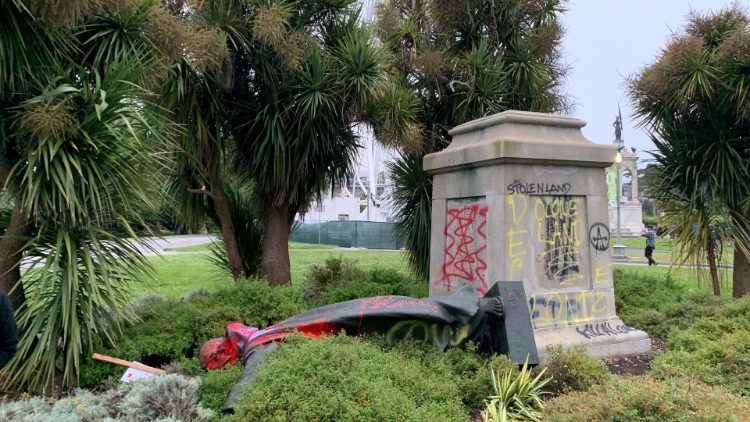 In an interview with Vatican News, the chairman of the USCCB’s Committee on Religious Liberty, encourages a “solution incorporating the commandment to love” as the Church’s response to violent attacks on Catholic institutions.

“We’re living in a time of some tension in the country,” says Archbishop Thomas Wenski of Miami, referring to months of unrest following the killing of George Floyd in Minneapolis while in police custody.

Cities in the United States have seen daily disturbances that are still ongoing, including “acts of desecration [and] destruction of property.” In an interview with Vatican News, Archbishop Wenski says the continuing violence and vandalism is “a matter of concern.”

However, he says, “as we raise these concerns, we understand that the proper response is not to reply in kind. And so, we look for a solution that also incorporates the commandment to love our neighbor – but to love them in truth, and also encourage them to do to others what they would want to be done to them.”

An “extraordinary hour of cultural conflict”

On Thursday, Abp Wenski, the head of the USCCB’s Committee on Religious Liberty, and Abp Paul Coakley, the chair of the Bishops’ Committee on Domestic Justice and Human Development, issued a statement condemning vandalism and destruction at Catholic sites.

In their statement, the Archbishops state that the United States is facing “an extraordinary hour of cultural conflict.” Asked about that affirmation, Abp Wenski explained that the political divide in the United States “is quite strong right now, and it seems to be a rush to extremes – on both sides – rather than the attempt to meet in the center.” That kind of polarization, he said, “is really not sustainable if we’re going to live together as citizens in one nation under God.”

Archbishop Wenski attributes the cultural war to differences in anthropology, or the understanding of the nature of humankind. “Our Catholic anthropology, formed by the natural law tradition… has strong beliefs on the objectivity of truth.” He said that belief “has implications in how we view institutions like marriage, how we view what is best for human flourishing and for families, etc.”

Those beliefs, he said, are “under attack” by “what Pope Benedict called the ‘globalization of relativism’ or [what] Pope Francis calls ‘ideological colonialism’.” Unfortunately, Abp Wenski says, the differences in belief are no longer being debated peacefully “in academia, or on radio shows.” Instead, “they seem to be being debated in a much coarser way on our streets these days.”

Claiming a space in the public square

The Church, says Abp Wenski, has “a proposal to make about what constitutes the conditions for human flourishing. So, the Church basically wants to claim her space, her legitimate space, in the public square, and to make that proposal.”

At the same time, he says, the Church tries to model how a conversation about what is best for human beings should happen. “So, as Pope John Paul II used to say, the Church does not impose, she proposes,” the Archbishop explains. The Church rejects the idea that beliefs can be imposed on others, and instead encourages dialogue, even with those who disagree. “That’s the path that we can find mutual understanding,” says Abp Wenski, “and perhaps forge a reconciled peace.”

A different way of living in society

In the face of violence, Abp Wenski says, the Church “must re-commit ourselves to a non-violent response, that we don’t return evil for evil.” So, he continues, “we have to model a different way of living in society.”

At the same time, Abp Wenski insists “we have to be vigilant so these incidences don’t get legs and continue. But that vigilance does not call us to be vigilantes.” Instead, he says, it means working with civil authorities to ensure that the protect people of faith and the property of the Church.

Sr Ruth Lewis: a mother through and through for her ‘children’