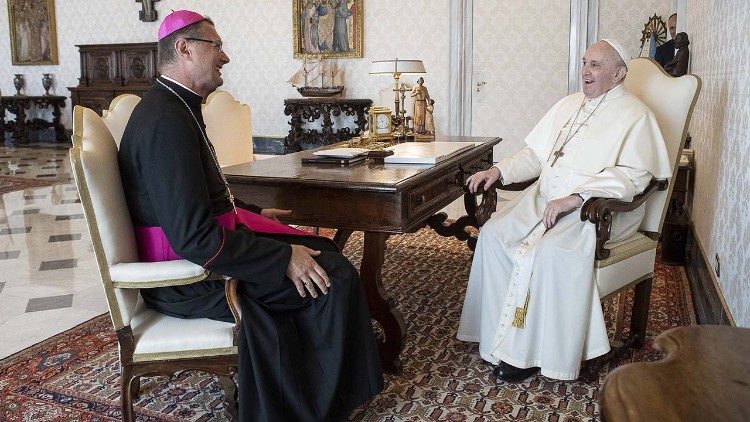 Archbishop Visvaldas Kulbokas begins his mission in Kiev as the new Apostolic Nuncio to Ukraine on 7 September. The 47-year-old Lithuanian-born Archbishop has served in the Secretariat of State and in various Pontifical missions. He describes his meeting with Pope Francis on Thursday as “a father who sends him with his encouragement and blessing.”

In an interview with Vatican News, Archbishop Visvaldas Kulbokas, whom Francis appointed Apostolic Nuncio to Ukraine last June and who will begin his assignment in Kiev on 7 September, speaks about his origins from Lithuania to Ukraine, and his experience at the Secretariat of State.

Born in Klaipėda, Lithuania, on 14 May 1974, Archbishop Kulbokas entered the Holy See’s diplomatic service in July 2004, and has worked in the Pontifical missions in Lebanon, the Netherlands, the Russian Federation, and at the Section for Relations with States of the Secretariat of State. He has also served at the Apostolic Nunciature in Kenya since 2020.

The meeting with the Pope on Thursday, the Archbishop explained, was a moment that was anything but formal and rather more the greetings between ‘a father and a son,’ who is about to leave, and to whom the parent entrusts his “trust and heart,” so that he may take them along with him.

“It was a joyful moment,” noted the Nuncio. “I met a youthful and energetic Pope who expressed his priorities for Ukraine to me” – a country, that the Pope has repeatedly stressed, “he loves very much.”

While not specifying the details of the conversation Archbishop Kulbokas spoke on what he considers to be the main challenges of the new mission, noting the strong encouragement received from Pope Francis.

How did the meeting with the Pope go, what did it mean to you?

The Pope expressed his vision and priorities for Ukraine to me, stressing several times how much he loves the country. He also entrusted to me his concerns about the great suffering of the Ukrainian people, both in the past and in the present, giving me his vision of Ukraine. it is, above all, a vision of encouragement, because if the people are suffering, if the country is suffering, you have to encourage them and it is not easy to do that.

I can say that it was a meeting between father and son. When the son has to go somewhere, the father says, “carry my heart, carry my mind, carry my voice, and represent it in the country.” And it was a very joyful and lively moment, because I met a very energetic Pope who has known Ukraine since he was 12 years old. In fact, it was Ukrainian priests who taught him how to serve Mass.

What challenges seem most important to this mission?

Above all, that of proclaiming Jesus. When the focus is on Jesus, everything else becomes relativized. In addition, what the Pope has stressed several times: joy. We Christians, starting with the bishops, the priests, must bring joy. Of course, there are problems but we have to face them without getting discouraged. Today’s Ukrainian reality is full of difficulties and problems, starting with the war, then the economic and social difficulties, the repercussions on political life and then the difficulties within the Church, and between the Catholic Church and the other Churches. And so the Pope encouraged me by saying: “Under the protection of Jesus and the Saints, carry your mission with much peace, with much heart, without losing your inner joy”. So it was a father sending me, encouraging and blessing me.

You come from Lithuania which shares a common history with Ukraine of being under an atheist regime for a period during which time the Church was persecuted. You are the first with this experience. Does this help you to better understand the situation and context in Ukraine?

I am sure it does. We will have to work on it and put in some effort, but I am sure that this personal history of mine helps – being born when we were still part of the Soviet Union. I remember that my father and my mother used to go to Kiev for medical treatment. Kiev, for us, in my home, was almost the same country. So now if I go to Kiev, it is my home! In this sense, going to work in a country that is so close to my heart is much easier, because there is much more heart and much more understanding – at least historical. I am not saying that I understand all the difficulties that there are today, but the historical ones, yes. And I am sure all of this helps a lot.

What does prayer give us? It gives us courage; it encourages us to be creative. Prayer is an inexhaustible source. This is also a piece of advice I received from the Pope: a lot of prayer, my own personal prayer. In this regard, I will be very grateful for the prayers of my friends and also of those who listen to me, when they offer that personal prayer, that personal blessing, sending it to me spiritually through the saints and through the angels.

Pope: Commitment to peace needed more than ever