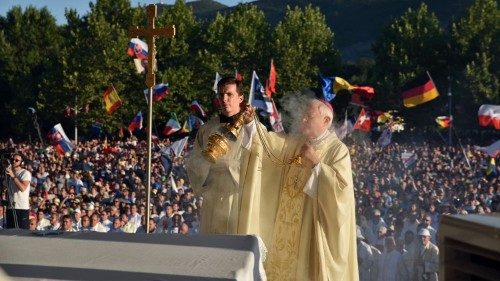 Polish Archbishop Henryk Hoser was 78 years old. Pope Francis had sent him to Medjugorje, the small town in Bosnia and Herzegovina, to accompany the parish community and visiting pilgrims, without entering into questions regarding the Marian apparitions there. Archbishop Hoser said that in Medjugorje, many people come to encounter Jesus through Mary.

Polish Archbishop Henryk Hoser died on Friday, August 13, at the Hospital of the Ministry of Interior in Warsaw, Poland. He was 78 years old. The Polish Bishops’ Conference made the announcement. Since 2018, he had served as Apostolic Visitor to the parish of Medjugorje.

In Medjugorje with a pastoral mission

Pope Francis entrusted him with the task of accompanying, in a “stable and continuous” way, the parish community of this small town in Bosnia and Herzegovina and the many faithful who go there on pilgrimage and “whose needs require special attention” the Vatican noted. The director of the Holy See Press Office had underlined that this was a sign of the Pope’s care for the pilgrims. Archbishop Hoser was sent to Medjugorje with a strictly pastoral task, without entering into questions regarding the purported Marian apparitions.

Sent to assist the faithful

Archbishop Hoser explained in the past that the Pope “sends us there, where people live, where the faithful gather seeking the light of salvation”; and in Medjugorje pilgrims come from all over the world “to meet someone: to meet God, to meet Christ, to meet His Mother.” “The Marian way,” Hoser said, “is the safest and most certain” because it leads to Jesus, and here the faithful have “as their central focus the Holy Mass, adoration of the Blessed Sacrament, and frequent reception of the Sacrament of Penance.” It is true “Christocentric” worship. “Medjugorje,” the Apostolic Visitor affirmed, “offers us the time and space of divine grace through the intercession of the Blessed Virgin Mary, Mother of God and Mother of the Church, venerated here with the title of ‘Queen of Peace’. This title is well known through the Litany of Loreto.” And “the world,” he stressed, “is in great need of peace.”

Medical doctor and missionary in Rwanda

Archbishop Hoser was born in Warsaw on November 27, 1942, and studied medicine before joining the Society of the Catholic Apostolate (Pallottines) in 1969. Ordained a priest in 1974, he left as a missionary for Rwanda, where he remained until 1995. In Kigali he founded the Medical-Social Center, leading it for 17 years, and the Family Formation Center (Action Familiale). For several years he was secretary of the Episcopal Commission for Health, and then also of the Episcopal Commission for the Family, president of the Association of Affiliated Medical Centers in Kigali (BUFMAR), head of an AIDS epidemiological monitoring center and a program of psychological-medical and social assistance to patients. In 1994 he was appointed expert in the field of the family and development at the Special Synod for Africa. In the absence of the apostolic nuncio to Rwanda, in 1994 he was also appointed apostolic visitor to that country, an office he held for over two years.

From 1996 to 2003 he was regional superior of the Pallottines and a member of the Missionary Council of the Conference of Major Superiors in France. In 2004, he was rector of the Pallottine Missionary office in Brussels, Belgium, and was involved in pastoral work within the European Community. In 2005, John Paul II appointed him assistant secretary of the Congregation for the Evangelization of Peoples and president of the Pontifical Mission Societies with the rank of archbishop. In 2008, under Benedict XVI, he became archbishop-bishop of the Diocese of Warsaw-Prague. In February 2017, Pope Francis sent him to Medjugorje as a special envoy of the Holy See. The following December, he became bishop emeritus of Warsaw-Prague. On May 31, 2018, the Pope appointed him apostolic visitor of the parish of Medjugorje, indefinitely and ad nutum Sanctae Sedis (“at the disposition of the Holy See”). Archbishop Hoser death comes as Medjugorje marks 40 years since a group of young people began claiming to have apparitions and locutions from the Blessed Virgin Mary.