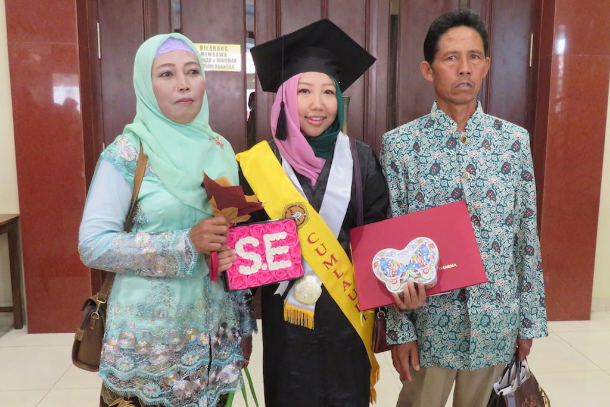 When she graduated from a vocational high school in the Indonesian province of East Java back in 2010, all Erwiana Sulistyaningsih wanted was to work and raise money to fund her university studies.She knew her impoverished parents in Ngawi, a district in the province, would never be able to afford her tuition fees.Her father worked on an oil palm plantation in Sumatra, and later for a construction firm in Jakarta. Her mother was a farm worker who had previously worked as a maid in Brunei Darussalam.To realize her dream, Sulistyaningsih moved to Jakarta to work as a waitress. But the salary was too low to support her goal, so she accepted an offer to work in Hong Kong with the promise of higher remuneration.In May 2013 she departed for the Chinese territory in the hope of returning to her homeland with enough money to see her through higher education and also help her family.

However, what she experienced there completely buried her dreams. She had to work long hours for eight months in her employer’s house where she was subjected to imprisonment, starvation, and severe beatings.”I worked 20 hours a day with only one to three hours’ sleep. I was only able to eat once a day, and I was never given any holidays,” she told ucanews.com.At that time she was only permitted to drink a small amount of water each day because her boss did not want her to dodge work by taking toilet breaks.”I was also given medication to prevent menstruation,” the 27 year old said.After five weeks of working in such conditions, Sulistyaningsih managed to escape and reported the case to her agent. But she was forced to return to the same job and endure more torture.She said her employer often struck her around the head with a mop handle, causing her to suffer multiple wounds to her scalp as well as a broken nose and several chipped teeth.Another eight months passed until things got to the point where she was physically unable to keep working due to the constant assaults by her brutal boss.Finally she was dumped at Hong Kong airport with just HK$9 in her pocket, she said. She was 24 at the time.”I was threatened and told not to report what happened to me to law enforcement agencies or my parents would be killed,” she said.Sulistyaningsih’s case caught the world’s attention after she was hospitalized and her photos circulated online, prompting rallies in Hong Kong demanding her employer be arrested and brought to justice.Hong Kong is home to around 300,000 maids, mainly from Indonesia and the Philippines, and criticism from campaign groups over their treatment is growing

‘Time’ pays tributeWith the assistance of migrant workers’ advocacy groups, Sulistyaningsih was motivated to take up the fight against both her recruiter and employer.Government officials repeatedly approached her and her family to mediate and avoid legal action, but she refused their advances.Her employer, mother-of-two Law Wan-tung, was later sentenced to six years in jail and ordered to pay her compensation.Time magazine paid tribute to Sulistyaningsih’s courage in 2014 by naming her one of its 100 Most Powerful Persons for her role in speaking up for the voiceless.That same year several organizations from Hong Kong, Australia, and Indonesia offered her scholarships to continue her studies.Despite still being physically weakened by her ordeal, she accepted an offer from the Jesuit-run Sanata Dharma University in Yogyakarta and graduated this September.”I want to prove that I didn’t deserve to be a slave,” she said. “I am very proud that finally, my dream has come true.”Sulistyaningsih then pledged to dedicate her life to championing human rights and joined the Great Family of Indonesia Migrant Workers, or Kabar Bumi, which advocates for equal rights for migrant laborers.Among the cases she is advocating for now is the release of former Filipina maid Mary Jane Veloso, who is on death row in Indonesia for smuggling narcotics.”I feel it is my responsibility to help these people,” she said.Remembering the torture she experienced in Hong Kong, she said she wants to ensure others don’t share a similarly tragic fate.”I don’t want other people to suffer the pain I have gone through,” she said. Symbol of hopeErni Lestari, chairwoman of the International Migrants Alliance (IMA), who helped Sulistyaningsih in her struggle against her employer, described her as a role model for championing human dignity and opposing oppression.”Her victory and success proves we can be triumphant in our struggles,” Lestari said.”She is also a symbol of hope for many of us who are struggling for our rights, for a world without forced labor migration.”Magdalena Sitorus, commissioner of the National Commission on Violence Against Woman, said Sulistyaningsih was an inspiration for migrant workers showing they should never stop fighting for their rights.

Time for Indian Christians not to turn the other cheek