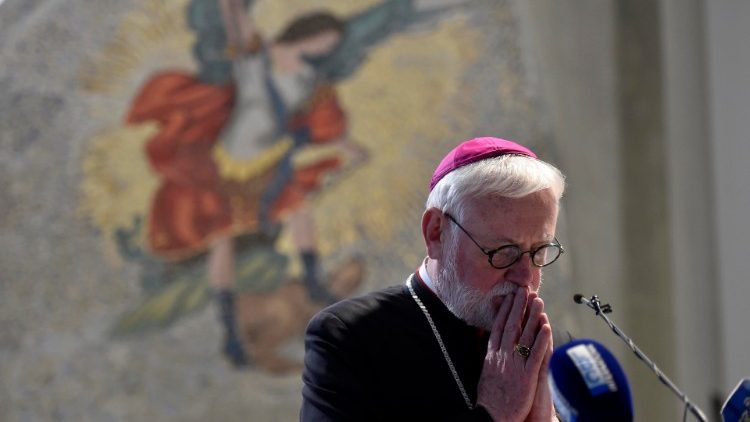 The Secretary for Relations with States on Friday concludes his visit to Lebanon, which began on 31 January. The archbishop met with President Aoun, the Orthodox and Catholic bishops, the Muslim authorities, and the families of the victims of the explosion at the port of Beirut. He reiterated the desire for the Pope to visit “when conditions permit”.

Words and gestures of closeness and solidarity with the “dear people” of Lebanon, caught in the “grip” of an economic and political crisis that seems to have no solution, have been a key element of the four-day visit to Beirut of Archbishop Paul Richard Gallagher, Vatican Secretary for Relations with States. In the country of the cedars from Monday 31 January to Friday 4 February, the archbishop was the spokesman for the Pope and the Holy See, which – he said – is ready to take an active part in, and probably even host, a national dialogue between the Lebanese parties to heal wounds and ease tensions. The Vatican’s “foreign minister” reiterated this Thursday to Lebanese reporters, to whom he repeated the appeal to the international community, already expressed by the Pope in his speech to the Diplomatic Corps on 10 January, not to let Lebanon sink but to help it forge a path of “resurrection” through concrete gestures, not just words, strengthening the relations necessary to help this strategic nation for the entire Middle East.

National dialogue and the Pope’s visit

With this in mind, Archbishop Gallagher, in response to a question from a local journalist, guaranteed the Vatican’s willingness to play a role in a dialogue between the Lebanese parties that could settle the disputes: “If it were to happen,” he said, “the Holy See would seriously consider participating in, and perhaps even hosting, a national dialogue. This, however, must be the result of a request made by all the parties involved.” In his conversation with journalists, there was no lack of reference to a hypothetical trip by the Pope to the Land of the Cedars, a desire expressed for some time by Pope Francis himself, who has said on several occasions that he wants to keep his “promise” to visit this land, “a symbol of generosity”. The trip will take place “when conditions permit”, the Archbishop said.

Prayer for the victims of Port explosion

Through the media, the archbishop encouraged the Lebanese people to continue to be “an example” of a “plural, tolerant and diverse” Middle East. He reminded Christians of their role as “the historical and social connective tissue of Lebanon”, so that they would not be reduced to a minority to be protected but would make an active contribution. “Weakening the Christian community risks destroying the internal balance and the Lebanese reality itself”, Archbishop Gallagher said. And he did not fail to spare a thought for the victims of the terrible explosion at the port of Beirut on 4 August 2020, as well as their families, the many injured, and those who lost their homes and jobs, and even “the hope to live”: “May they be consoled by faith and comforted by justice and truth”, were the words of the archbishop. The archbishop also prayed for them during the Mass celebrated on 2 February with the religious in the Basilica of Our Lady of the Miraculous Medal. He then met the families of the victims on two other occasions to express his condolences in person.

Numerous meetings and appointments punctuated the trip of the Vatican’s representative, who formally concluded his trip Friday with a private visit and Mass at the tomb of St Charbel, in the Convent of St Maron in Annaya. On Tuesday 1 February, Gallagher met President Michel Aoun in the Baabda Palace, to whom he reiterated the Pope’s concern that Lebanon’s identity as a “peace project” be preserved and that the use of Lebanon for foreign interests be stopped. On the same day, the prelate met the president of the country’s parliament, Nabih Berry, in the Aïn et Tîné Palace, and the army commander, General Joseph Aoun, in the Yarzé headquarters, just outside Beirut. This morning, a meeting was held with Prime Minister Najīb Mīqātī and the Minister of Foreign Affairs, Abdallah Bou Habib.

The coexistence of Christians and Muslims

On 2 February, Archbishop Gallagher opened the symposium “Pope John Paul II and the Lebanese message” at Holy Spirit University in Kaslik, an event entirely dedicated to the link between the Polish Pope and the country.  St John Paul II accompanied Lebanon’s history and dramas by “associating himself with its suffering through prayer and action”, Archbishop Gallagher recalled. The previous day, 1 February, he had already recalled John Paul II’s concern for Lebanon, as well as that of the most recent Popes, in a long speech before the academic staff and members of the Strategic Council of Saint Joseph’s University. The prelate, first of all, recalled the 75 years since the re-establishment of diplomatic relations between Lebanon and the Holy See and the great attention paid to this region “where Christians have always lived and played a fundamental role in culture and tradition”, side by side with Muslims, with whom they have developed “a unique relationship over the centuries”. It is precisely this “precious” aspect of Lebanon’s cultural history that cannot be lost, Archbishop Gallagher said, since it constitutes “the foundation of this country’s national well-being”.

Beirut is a pioneering country in journalism, literature, art, music and history. The Vatican representative said that it is essential that this knowledge be passed on to new generations “to foster justice and peace”: “A society without culture easily plunges into animosity, adversity and extremism”. “We must begin to integrate the prospect of a more fraternal and just world into our daily behaviour”. In concrete terms, this means “implementing necessary economic reforms and promoting just systems of governance”; a path that is not easy but necessary at a time when “more and more quasi-state extremist actors are emerging, taking advantage of the bewilderment and discontent of young people and many others”.

“If a culture and a policy of encounter were promoted, together with a beautiful and more fraternal dialogue between the great religions present (Judaism, Christianity and Islam),” Archbishop Gallagher said, “this region could finally become cohesive and united, representing an important meeting point in the international economic and political system.”

With the Maronite bishops

These words were echoed in the monthly assembly of the Maronite bishops, gathered yesterday in the patriarchal see of Bkerké, where the archbishop participated as a special guest. The bishops sounded the alarm about a Lebanon that risks becoming a platform used by regional and global powers to conduct their proxy wars. The bishops made a concrete denunciation in the final communiqué of the meeting, in which they emphasised that the visit of the Vatican’s high representative manifested at an international level the Pope’s concern for Lebanon’s present and future.

After a meeting with the Maronite bishops, presided over by Patriarch Bechara Boutros Räi, with whom he had a private conversation, Archbishop Gallagher visited the Caritas migrant reception centre in the Shelter School and the Lazarist Carlo Acutis youth centre in the afternoon.  The programme also included a meeting with the Orthodox patriarchs and Catholic bishops, and then a large gathering with Lebanese religious leaders who had come to the Vatican on 1 July to join the common prayer called for by Pope Francis. A lunch sealed the meeting.

On Friday morning, the programme of the visit began with a meeting with the Muslim authorities: the Grand Mufti of the Lebanese Republic, Abd al-Latif Derian, in Dar el-Fatwa; Sheikh Abd al-Amir Qabalan, head of the Shiite Supreme Council; and the Druze Sheikh Akl Naim Hassan. During the talks, the theme of the importance of the role and coexistence of Muslims and Christians for the future of the country continued.

Pope to Spirit and Arts Foundation: You are seeds of hope