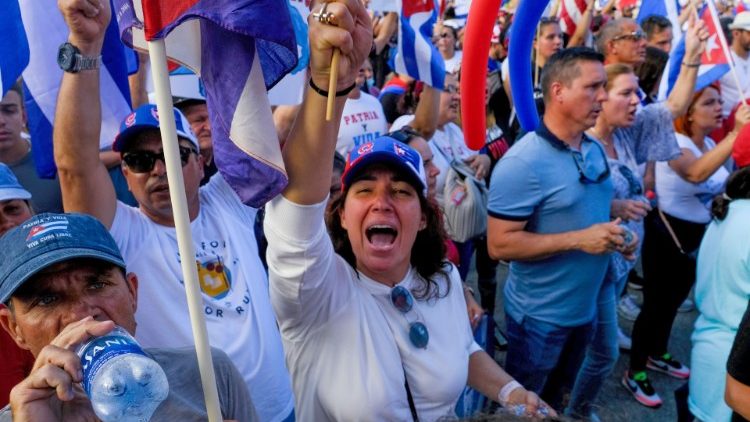 Following some of the biggest anti-government protests Cuba has seen in decades, US bishops have expressed support for the people and for the bishops of the Caribbean nation who have called for a favorable solution through mutual listening.

The Catholic Church in the United States has expressed its solidarity with the Church and people of Cuba, following some of the biggest street protests the Caribbean nation has seen against the government.   Since July 11, citizens have been expressing their frustration against an economic and health crisis that has seen shortages of basic goods, medicine, power outages and poor handling of the Covid-19 pandemic.

The protests that have been described as the largest anti-government demonstrations since the Maleconazo uprising in 1994, also vented their anger against curbs on civil liberties.  Security forces responded cracking down heavily on demonstrators, detaining scores of activists.

The US bishops’ statement, jointly signed by USCCB president, Archbishop José H. Gomez of Los Angeles, and Bishop David J. Malloy of Rockford, chairman of the bishops’ Committee on International Justice and Peace, backed the Cuban bishops who in their statement on July 12 said,

‘A favorable solution will not be reached by impositions, nor by calling for confrontation, but through mutual listening, where common agreements are sought and concrete and tangible steps are taken that contribute, with the contribution of all Cubans without exception, to the building-up of the Fatherland.”

In this spirit, the US bishops urged the US “to seek the peace that comes from reconciliation and concord between our countries.”  Archbishop Gomez and Bishop Malloy wrote, “For decades, the United States Conference of Catholic Bishops, in conjunction with the Holy See and the Cuban bishops, has called for robust cultural and commercial engagement between the United States and Cuba as the means to assist the island in achieving greater prosperity and social transformation.”

The statement concluded urging that Our Lady of Charity, the patroness of Cuba, “watch over her children in Cuba, and that, together”, Cuba and the US “can grow in friendship in the interests of justice and peace”.

As thousands of Cubans in Havana and in 14 other Cuban cities took to the streets since July 11, similar solidarity street protests were staged in a few countries, largely led by the Cuban diaspora such as in the US, Chile, Spain, Argentina and Brazil.

In Cuba, at least one death was confirmed after police shot a protester. The government also has restricted internet and phone services. The Cuban government has responded by arresting people, including clergy, not only on the streets but also in their homes.  The Communist government has blamed the protests mostly on US-financed “counter-revolutionaries” exploiting economic hardship caused by US sanctions.

Pope Francis on Sunday called for peace and dialogue in the Caribbean nation, expressing his closeness to the people.  He prayed that Cuba be able to create a just and fraternal society through peace, dialogue and solidarity.

The US bishops have repeatedly called for the easing of US embargo against Cuba, encouraging the reconciliatory policy started in 2014 by president Barack Obama, which was however overturned by his successor, Donald Trump, who labelled Cuba as a “state sponsor of terrorism,” just days before leaving office.

US President, Joe Biden, had vowed during his presidential campaign to ease some of the sanctions on Cuba tightened by Trump.  The US is expected to soon announce initial steps reviewing its Cuba policy and in response to Havana’s crackdown on the protests.

The Communist government had succeeded in keeping the Covid-19 infections in check last year by imposing strict quarantines, isolating the infected and shutting down its tourism industry despite devastating economic consequences.

But in recent weeks, things in the Caribbean nation of 11 million people have gone out of hand, largely driven by the arrival of the more contagious Delta variant of the virus.  Cuba reported nearly 4,000 confirmed cases per million residents over the last week, nine times more than the world average and more than any other country in the Americas for its size.

The first three weeks of July have accounted for about 100,000 of the nearly 300,000 infections recorded so far in Cuba. The national director of epidemiology said Tuesday that 717 people have died so far this month in Cuba, a heavy share of the nation’s total of 2,019.  This has stretched the country’s healthcare sector to the limits, and has been one of the reasons stoking the protests.

Pope’s upcoming itinerary in Budapest and Slovakia is released

UNICEF appeals for aid for earthquake victims in Haiti