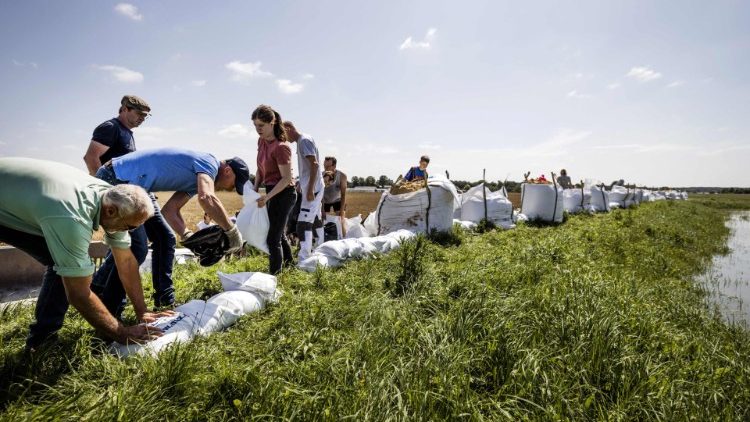 Rescue crews are racing to find survivors of floods that devastated parts of western Europe, killing more than 150 people and leaving at least hundreds more still missing. In the Netherlands, a low-lying seafaring nation, authorities declared an emergency in the south. Pope Francis has expressed his closeness to the victims and their families and communities.

With the Maas River and other streams rise to record levels, evacuations are still ongoing in the south of Dutch Limburg province.

A hospital in the city of Venlo was among the latest sites to be evacuated. Hundreds of Dutch soldiers are now involved in rescue missions.

Across the border, in Germany and Belgium, the damage is even worse. More than 150 people died in these neighboring nations, most of them in Germany. In addition, and hundreds more remain missing.

German President Frank-Walter Steinmeier, who visited flood-stricken areas in his country, said he was deeply moved by what he saw.

President Steinmeier said he was stunned by the devastation. He referred primarily to the damage in the flood-hit regions of the Western states of North Rhine-Westphalia, Rhineland-Palatinate, and Saarland, which have been the worst affected by the rainfall.

People are losing everything

He added that “Many people have lost what they have built all their lives.” And he makes clear that “Whole places are scarred by the disaster.”

“I have been in contact with my colleagues in Germany and Belgium, where over 100 people have died in the flooding. We can only hope that this will not happen here,” Rutte stressed.

He said his heart also goes out to the people who were already impacted by the coronavirus pandemic. “If you look to the flooded bars and restaurants, for instance, it’s very sad.”

Heavy rains also hit Switzerland and Luxembourg. European leaders blamed the extreme weather causing the heavy rainfall and related flooding on what they view as dangerous climate change. However, it has also sparked debate about improving water management as an increasing number of people live in low-lying areas near rivers.

In addition, much of the Netherlands lies below sea level, adding to concerns about the future of dykes and other flood defense systems.

Pope to Friars Minor: ‘The poor and the excluded are your teachers!’