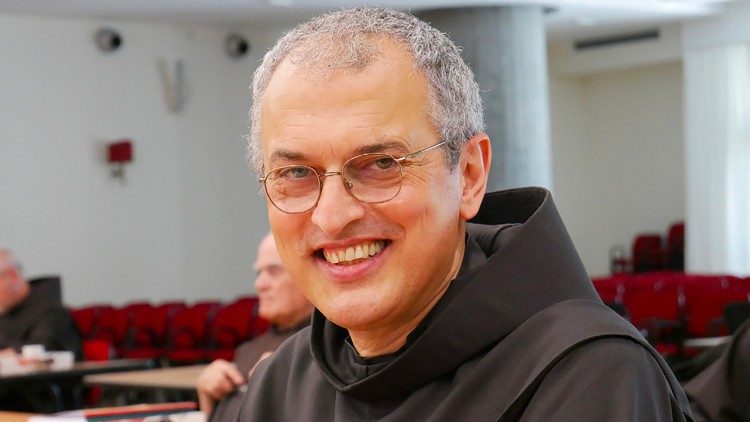 Pope Francis congratulates Father Massimo Fusarelli, who was elected minister general of the Order of Friars Minor on Tuesday.

Members of the general chapter of the Order of Friars Minor (OFM), simply known as the Franciscans, on Tuesday elected their new minister general.   Italian priest Fr. Massimo Fusarelli, 58, will head the worldwide order for the term 2021-2027.

Pope Francis sent a message conveying his prayers and blessings to the new Minister General of the Franciscan order of the Friars Minor.

“Having learned of your election,” the Pope said in a telegram, “I congratulate you and assure you of my prayers and blessings, that the Lord may assist you and protect you in the performance of your service.”

The Pope further prayed that St. Francis may be an encouragement to Fr. Fusarelli in leading his friars.

The news of the election was made public on Tuesday by Cardinal João Braz de Aviz, Prefect of the Congregation for Institutes of Consecrated Life and Societies of Apostolic Life, designated by Pope Francis as the Cardinal delegate to preside over the General Chapter of the Order of Friars Minor.

The Chapter meeting, which runs from 3 – 18 July at the San Lorenzo da Brindisi International College saw the participation of 118 delegates from all over the world, including Fr. Francesco Patton, the Custos of the Holy Land.

The newly-elected Minister General is the 121st successor of St. Francis of Assisi, succeeding U.S. Franciscan Fr. Michael Perry, who was elected minister general in 2013 to continue the term of the then minister general Fr. José Rodríguez Carballo, whom Pope Francis transferred to the Vatican as secretary of the Congregation for Institutes of Consecrated Life and Societies of Apostolic Life.  Fr. Perry was re-elected as minister general in 2015.

Born in Rome on March 30, 1963, Fr. Fusarelli grew up in the Italian capital with his family. He met the Friars Minor in the parish of San Francesco di Tivoli and professed his first vows on July 30, 1983. After his novitiate, he attended philosophy and theology at the Antonianum, the Pontifical University of Saint Anthony, obtaining a bachelor’s degree in theology in 1988.   He professed his solemn vows on January 8, 1989, and on September 30 was ordained a priest.

From 1990 to 1999, he was animator of the vocation and youth ministry and from 1996 national coordinator.   In this capacity, he was called to be a member of the National Council of the National Vocations Center of the Italian Bishops’ Conference. From 1999 to 2003 he was formator of the friars of temporary profession, provincial councilor and provincial and national moderator of ongoing formation. From 2003 to 2009, Fr. Fusarelli was called to the General Curia as general secretary for formation and studies of the Order of Friars Minor.

He was Provincial Definitor, Animator of the pastoral care of vocations and then of ongoing formation; General Secretary of Formation and Studies from 2003 to 2009; General Visitor for the Province of Naples and then for the unification process of the Provinces of Northern Italy; He was elected Provincial Minister of the Province St. Bonaventure (Lazio and Abruzzo regions) on July 2, 2020.