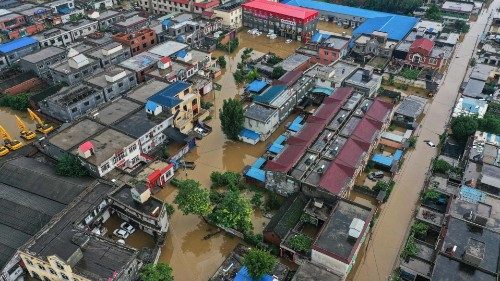 Pope Francis prays for the victims of flash floods in the city of Zhengzhou, capital of China’s Henan Province. He also remembers the Olympic games that started on Friday in Tokyo, blessing all those taking part.

Pope Francis expressed his closeness with the people of the Chinese city of Zhengzhou and Henan Province in China, struggling after torrential rains in recent days caused devastating flash floods. The Pope said, “I pray for the victims and their families, and express my sympathy and solidarity with all those suffering from this calamity.”

The number of victims is increasing day by day and some people are still missing. Chinese state television reports more than 3 million citizens affected by the torrential rains and 376 thousand evacuated. The city of Zhengzhou, capital of Henan Province, has been hard hit with as seen in shocking media footage showing avenues transformed into rivers and the subway passengers struggling to break free of submerged cars.

The Pope also recalled the opening, on Friday, of the 32nd Olympics in Tokyo. He said “In this time of pandemic, may these Games be a sign of hope, a sign of universal brotherhood marked by a healthy spirit of competition.”

And he offered a benediction: “God bless the organizers, the athletes and all those who collaborate for this great festival of sport”.