Pope prays for just and fraternal society in Cuba 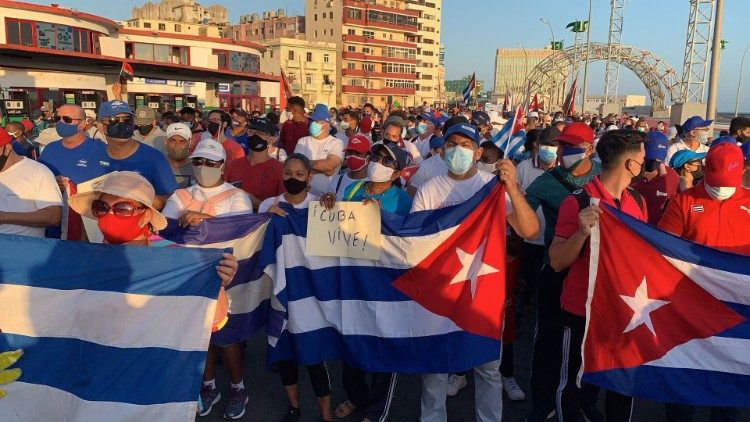 Pope Francis expresses closeness to the people of Cuba as the nation undergoes protests and unrest and prays for the building of a just society.

Pope Francis called on Sunday for peace and dialogue in Cuba after unprecedented, nationwide protests rocked the communist-run country.

Speaking after the Angelus prayer in the Vatican, in his first appearance since being discharged from Hospital after surgery on Wednesday, the Pope said “I am also close to the dear people of Cuba in these difficult times, in particular to those families suffering the most.”

Last week, Cuba erupted in some of the worst unrest seen in the country in decades, with protesters in dozens of locations calling for “freedom”.

On Saturday, pro-government forces, including both President Miguel Díaz-Canel and his 90-year-old predecessor, Raúl Castro, took to the streets in Havana with rallies of supporters to uphold government. The President accused the US trade embargo on the island nation for poverty and social injustice and international media for spreading what he called “malicious interpretation” of the latest events.

The Pope said he is praying that “the Lord might help the nation construct a society that is more and more just and fraternal through peace, dialogue and solidarity.”

“I urge all Cubans to entrust themselves to the maternal protection of the Virgin Mary of Charity of Cobre. She will accompany them on this journey,” he said.