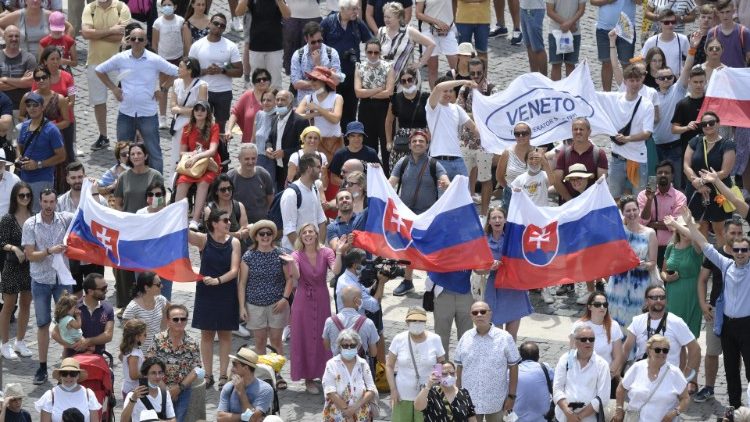 Pope Francis invites authorities in the southern African nation of Eswatini to dialogue and reconcilation. He also announces his journey from September 12-15 to Budapest, Hungary, and neighboring Slovakia.

At the conclusion of the Sunday Angelus, Pope Francis turned his thoughts to the southern African nation of Eswatini. He recalled news of unrest and violence being reported and called on those in authority and those aspiring for the future of their country to work together for “dialogue, reconciliation and a peaceful settlement” to their differences.

The Pope also said he is pleased to announce his journey from September 12 to 15 to Slovakia for a pastoral visit. The trip begins first with a visit to the Hungarian capital of Budapest. There he will concelebrate the concluding Mass of the 52nd International Eucharistic Congress. He expressed his gratitude to all those organizing and preparing the journey, offering his prayers for them and inviting everyone to do the same.

The Director of the Holy See Press Office, Matteo Bruni, issued a statement after the Angelus noting that Pope Francis “accepted the invitation from the civil Authorities and the Episcopal Conferences”.

“On Sunday, 12 September 2021”, the statement continues, “Pope Francis will be in Budapest for the celebration of Holy Mass on the conclusion of the 52nd International Eucharistic Congress; subsequently, from 12 to 15 September 2021, he will travel to Slovakia, visiting the cities of Bratislava, Prešov, Košice e Šaštin. The program of the Journey will be published in due course”.

Pope at Angelus: Open your eyes to God’s humble presence