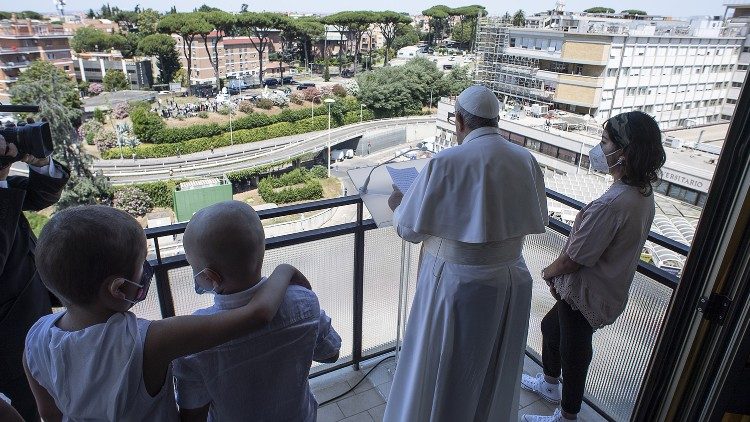 Pope Francis conveys his gratitude for the care he received during his recent hospitalization at the Gemelli Hospital in a letter to the Rector of the Sacred Heart Catholic University with which the hospital is affiliated. He highlights that the University, which celebrates 100 years this year, bears within its name, “the vocation of taking care of the human person.”

Pope Francis on Wednesday sent a message to the Rector of the Sacred Heart Catholic University, Franco Anelli, in appreciation for the professional care and concern he received during his recent hospitalization at Rome’s Agostino Gemelli Hospital.

The Gemelli Hospital is one of the largest hospitals in Italy and serves as the teaching hospital for the medical school of the Sacred Heart Catholic University. It owes its name to the Italian Franciscan friar, physician and psychologist, Agostino Gemelli.

The Pope’s letter comes a week after returning from a 10-day hospitalization for a scheduled surgery for diverticular stenosis of the colon. Following the successful operation, he returned to the Vatican on July 14.

“Having returned home after a stay in hospital, I would like to address my thoughts to you and to the University over which you preside,” the Pope said in the letter.

“It is a grateful and affectionate thought for the closeness I have experienced, for the genuine and caring cordiality I have seen in every face, for the professionalism of all those who have taken care of me.”

The Pope also noted that his hospitalization happened during the year in which “la Cattolica” (the University) marks its centenary – an anniversary which is celebrated with the tag, “A century of the future”, the Pope noted.

Care: An expression of the heart

The Holy Father then highlighted that “care is an expression of the heart” and the Sacred Heart Catholic University bears in its name, the “vocation of taking care of the human person.”

In this regard, he went on to testify of his personal experience of witnessing how there is no time for nostalgia or regrets about the past at the Gemelli hospital. Rather attention is given to “the flesh of Christ suffering in the sick of every age and condition” which requires “a present and attentive gaze, capable of instilling hope in moments of fatigue and of looking ahead.”

“It is true,” the Pope affirmed, “the cultural and integral promotion of the human person opens the door to the future.”

The Holy Father concluded by reiterating his expression of gratitude and imparting a blessing on the Rector, his loved ones, and all who make up the family of the Sacred Heart Catholic University.