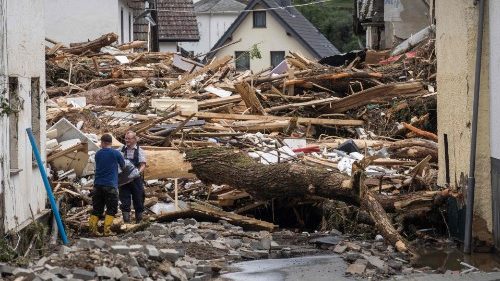 In a telegram sent on Thursday evening through the Cardinal Secretary of State Pietro Parolin, Pope Francis expresses his nearness and says he is praying.

On Thursday evening, a telegram was sent through the Vatican’s Secretary of State, Cardinal Parolin to the President of the Federal Republic of Germany, Franz-Walter Steinmeier.

The telegram says Pope Francis was “deeply affected” on learning “the news of the severe storm and floods in North Rhine-Westphalia and Rhineland-Palatinate”.

It continued saying he is remembering in prayer “the people who have lost their lives” and is especially praying “for the people who are still missing, for the wounded”, as well as for those whose property has been damaged or destroyed “due to the power of nature”.

To the families who have lost loved ones, the telegram says the Pope “profoundly participates” in their loss.

The telegram concluded assuring the Pope’s “spiritual closeness” to all who have been affected by the flooding, and all participating in search and rescue operations.

“Pope Francis implores God’s help and protection on everyone.”

As of the publication of this article, over 50 people have been counted among the dead and dozens others are missing due to flooding that occured in North Rhine-Westphalia state and in Rhineland-Palatinate.

It is being reported that entire villages were reduced to rubble after heavy rainfall caused rivers to overflow.

Many people have been rescued off of rooftops and about 200 soldiers in the German army are contributing to the search and rescue operation under way.

Belgium was also affected. As of the publication of this article, there are 8 deaths being reported there.