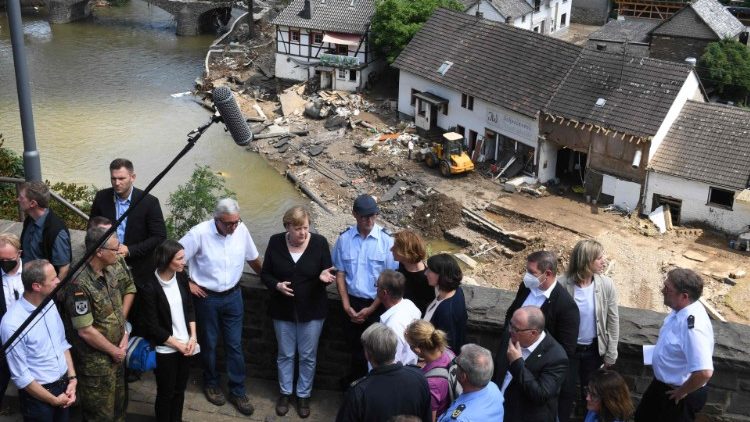 Pope Francis expresses his vicinity to flood-struck populations in Germany, Belgium and other western European nations where the death toll of more than 180 keeps rising with hundreds of people still missing.

“I express my closeness to the populations of Germany, Belgium and Holland, struck by catastrophic floods,” said Pope Francis, speaking after the Sunday Angelus.

He said he is praying “the Lord may welcome the deceased and comfort their loved ones, may he sustain the efforts of everyone who are helping those who have suffered serious damage.”

The Pope had already sent a telegram on Thursday evening in which he said he was “deeply affected” on learning “the news of the severe storm and floods in North Rhine-Westphalia and Rhineland-Palatinate” in Germany.

Since then, heavy rains have triggered catastrophic floods also in Belgium and have wreaked much damage in some areas in The Netherlands.

As of Sunday, the death toll in western Germany and Belgium rose to at least 184 after burst rivers and flash floods collapsed houses and ripped up roads and power lines.

Hundreds of others were still missing or unreachable as several areas were inaccessible due to high water levels while communication in some places was still down.

The European floods, which began on Wednesday, have mainly hit the German states of Rhineland Palatinate, North Rhine-Westphalia as well as parts of Belgium.

The German government is reportedly ready to disburse more than 300 million euros in immediate relief and billions of euros to fix collapsed houses, streets and bridges.

In Belgium, which will hold a National Day of Mourning on Tuesday, water levels were falling on Sunday and the clean-up operation was underway. The military was sent in to the eastern town of Pepinster, where a dozen buildings have collapsed, to search for any further victims.

Tens of thousands of people are without electricity and Belgian authorities said the supply of clean drinking water was also a big concern.

Emergency services officials in the Netherlands said the situation had somewhat stabilized in the southern part of Limburg province, where tens of thousands were evacuated in recent days, although the northern part was still on high alert.

Pope prays for just and fraternal society in Cuba