Pope and Anglican leaders: More needs to be done for South Sudan 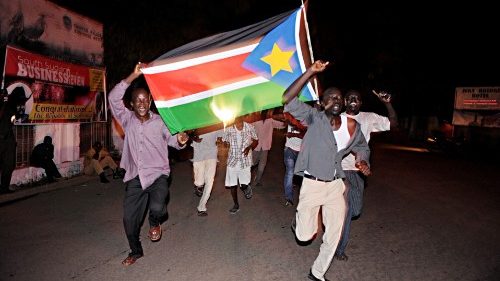 Pope Francis, Justin Welby and Jim Wallace send a joint message to the political leaders of South Sudan encouraging them to do more to shape a nation “in which the dignity of all is respected and all are reconciled.”

Marking the 10th anniversary of the Independence of South Sudan, Pope Francis and leaders of the Churches of England and of Scotland – Justin Welby and Jim Wallace – reach out to the leaders of the world’s youngest nation with an appeal to do more for the good of their people.

In their letter, the Holy Father, the Archbishop of Canterbury and the Moderator of the Church of Scotland, note the sad predicament of South Sudanese whom, they say, “continue to live in fear and uncertainty, and lack confidence” that their nation can indeed deliver the ‘justice, liberty and prosperity’ celebrated in their national anthem.

Increasing intercommunal violence, the  threat of the peace process unraveling, and dire humanitarian conditions across large swaths of South Sudan continue to plague development. More than a year after President Salva Kiir and former opposition leader Riek Machar formed a unity government, there has been slow progress on implementing the country’s main peace agreement, which was signed in 2018 formally ending a civil war that began in 2013.

The letter that encourages the leaders to make “greater efforts to enable (its) people to enjoy the full fruits of independence,” recalls another such letter written by the same signatories at Christmas, in which they said they were praying the leaders might experience greater trust among themselves and be more generous in service to their people.

“Since then, we have been glad to see some small progress,” they write, however, “much more needs to be done in South Sudan to shape a nation that reflects God’s kingdom, in which the dignity of all is respected and all are reconciled.”

The need for personal sacrifice

Such an effort, they add, “may require personal sacrifice from you as leaders – Christ’s own example of leadership shows this powerfully – and today we wish you to know that we stand alongside you as you look to the future and seek to discern afresh how best to serve all the people of South Sudan.”

The three religious leaders also recall “with joy and thanksgiving the historic meeting of the political and religious leaders of South Sudan at the Vatican in 2019 and the weighty promises made on that occasion.”

It was during that meeting that took place upon the invitation of Pope Francis to Salva Kiir, Riek Machar and a group of political and religious representatives, that the Holy Father knelt to kiss the feet of the President and his Deputy, imploring them not to return to civil war, to stay in peace and to go forward.

We pray, the letter concludes, “that those promises will shape your actions, so that it will become possible for us to visit and celebrate with you and your people in person, honouring your contributions to a nation that fulfils the hopes of 9 July 2011.”