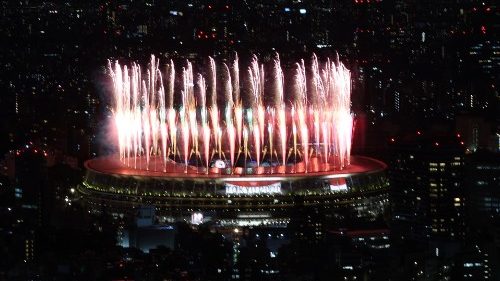 The Olympics Games got underway in Tokyo on Friday celebrating the world’s best athletes set to compete amid the COVID-19 pandemic.

Fireworks lit up the night sky on Friday as the 32nd Olympic Games in Tokyo got underway.

This is a games like no other, due to a pandemic which delayed the games for a year and has prevented spectators from watching from the stands.

The pandemic was a key theme during the ceremony as dancers moved about while projection mappings showed connections between them, highlighting how people around the world, including the athletes, have formed fresh connections online during the lockdown.

There were fewer than 1,000 people in attendance which included the Japanese Emperor Naruhito and International Olympic Committee (IOC) President Thomas Bach, who were both wearing masks.

There are more than 11,300 athletes from 207 nations competing in these games who are all looking to come home with a coveted Olympic medal.

There will be 339 medal events held across 33 sports. Five new sports have also been introduced. There is also a team of refugee athletes competing under the Olympic flag.

But as the games get underway, there are still concerns. Only a third of people in Japan have had even one dose of vaccine, and Olympics organisers are facing a shortage of COVID-19 testing kits needed for their daily testing programme.

The Olympics have also been hit by a string of scandals, including the exit of senior officials over derogatory comments about women, jokes about the Holocaust and bullying.

However, for the athletes competing, the next two weeks will be a rollercoaster of highs and lows as they compete for Olympic glory.

Guerrero: 2020 was a difficult year, but better than expected