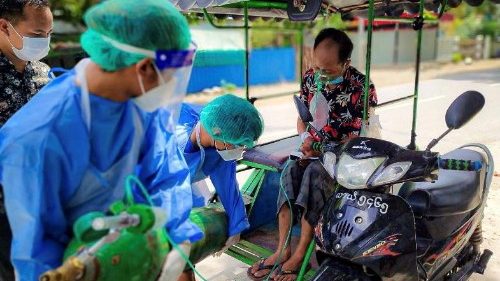 The Philippine bishops dedicated July 19 as a “Day of Solidarity with Myanmar”. On that day, they asked churches across the nation to toll their bells at noon and at 6:00 pm, and recite a prayer they composed especially for the suffering country.

The Catholic Church of Myanmar has been deeply moved by the solidarity and closeness that the Catholics of the Philippines have shown for the people of Myanmar who are reeling under an intractable political crisis, exacerbated by a devastating surge in Covid-19 infections.

The CBCP declared last Monday, July 19, a “Day of Solidarity with Myanmar”, asking Catholic churches across the nation to toll their bells at noon and at 6:00 pm on that day.  The bishops also released a prayer for Myanmar.

Myanmar has been thrown into a deep political crisis by the February 1 military coup, that ousted Aung San Suu Kyi and her elected government, usurping all power in the country.  Since then, anti-coup protests and a civil disobedience movement have paralyzed much of the economy, leading to much hardship. The security force has responded with a brutal crackdown on protesters and dissidents, and the military has re-ignited old conflicts with armed ethnic groups backing the protests, forcing 211,000 to flee their homes.

The situation has been exacerbated by a devastating surge in the Covid-19 pandemic, with hospitals non-functional and an acute shortage of medical oxygen.

“Day of Solidarity with Myanmar”

“With grateful sentiments, we, Myanmar Catholics, deeply appreciate the communion of the Church in the Philippines through prayer day on 19th July, designated as Martyrs Day in Myanmar, in the memory of the sacrifice made by our founding fathers,” wrote Cardinal Bo in his letter.  He said the Philippines chose Myanmar’s Martyrs Day “as a day of solidarity with Myanmar”.  Martyr’s Day commemorates the assassination of General Aung San, the father of Suu Kyi, and other leaders of the pre-independence interim government on July 19, 1947.

“Your fellowship at these very challenging times in our history is a moving gesture,” Cardinal Bo wrote.  He said the people are facing three threats: the coup, the Covid pandemic and the collapse of the economy.  “The tragic Way of the Cross” that the people have been through in the last 5 months, he said, “has been an excruciating period of anguish”.  “Hundreds died in the conflict, Covid waves carried away unknown numbers, to be buried unsung and unwept in their last moments.”

“In these sorrowful moments, our sister Churches, like yours, stand by us, with intense prayer, a campaign for peace and reconciliation and consistent support to our people,” said Cardinal Bo, who is also president of the Federation of Asian Bishops’ Conferences (FABC).

“We are deeply touched by your national bishops’ conference initiative to hold a nationwide prayer and observe a day of solidarity with the people of Myanmar,” he said, adding, “These noble gestures continue to heal our people.”

The 72-year-old cardinal also expressed his gratitude to the Filipino Church for welcoming and training Myanmar men and women in the Philippines, which, he said, has empowered Myanmar’s Church.