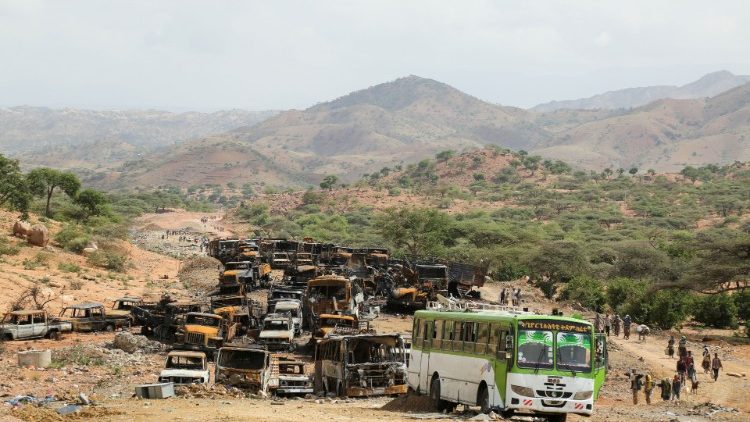 Ethiopian bishops insist that it is never too late to stop the violence in the country’s conflict-ridden region of Tigray where war has been raging for over eight months. They recommend dialogue and reconciliation on the path toward peace.

Bishops in Ethiopia have reiterated calls for an end to the violence in the nation’s Tigray region which has been ravaged by armed conflict since November last year.

The conflict in Tigray began when Prime Minister Abiy Ahmed ordered a military incursion in retaliation for an attack on a federal army base by forces loyal to the regions’ dissident Tigray People’s Liberation Front (TPLF) party. The ensuing violence has led to thousands of deaths, massive displacement and a worsening humanitarian situation. The UN has even warned that several hundred thousand people are at risk of starvation.

“It saddens our hearts hearing about war while we all would like to hear about peace and reconciliation,” they said in a statement published at the end of their ordinary Assembly, concerning the situation in the troubled Tigray region of the country.

War is not a solution

In light of the widening conflict, the bishops point out that “the horror of war is neither a remedy for wrongs nor a solution to a crisis” because “war brings untold suffering and the price that innocent people pay is incalculable.”

“It is never too late to stop the violence”, the bishops said, inviting the parties to embrace dialogue as a path to peace.

They further insisted that the only way forward, for the good of the people, is peace and reconciliation, which helps “to satisfy the demands of truth and justice, to ask for and grant forgiveness, to restore mutual trust, to recognize others as our brothers and sisters, no matter who they are and how deep our disagreements are, and to settle any differences through dialogue and negotiation”.

The bishops went on to call on the authorities on the ground to allow access to humanitarian aid for people trapped in the conflict-stricken areas.

According to a recently-released UN Tigray region humanitarian report, the situation in the region remains dire. 5.2 million people are in need of assistance while supplies and personnel fall short in responding to their needs. In addition, stocks are depleting fast and road access to the region has been greatly restricted in recent times.

“As Pastors, we cannot but feel the anguish and pain that the people are going through. We identify with them and their anguish is our anguish,” the bishops said.

They also extended their gratitude to “the many people who have been working tirelessly to alleviate the suffering of the population” while calling for continued support so that “no one is forgotten or left out.”

The ordinary assembly, held from 13 -16 July brought together bishops from all dioceses of Ethiopia except Bishop Tesfassilasie Medhin of Ethiopia’s Eparchy of Adigrate, which is within the war zone of Tigray.

The bishops offered prayers for Bishop Medhin who could not join due to the situation in Tigray, and also for the clergy, religious men and women and the faithful who have been going through challenging times due to the conflict.