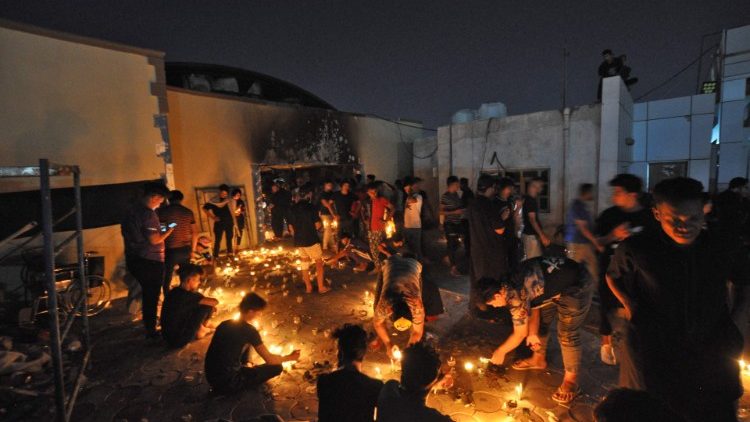 Cardinal Louis Raphael Sako calls for unity to help Iraq back on its feet and to prevent similar disasters in the future.

The faithful of Iraq-based Chaldean Catholic Church and their head have expressed their “deep sadness and sorrow” as the death toll from a fire in a coronavirus ward in a hospital in Nasiriyah, rose to 60 on Tuesday.

Health officials said scores of others were injured in the blaze that erupted on Monday at al-Hussein Teaching Hospital in Nasiriyah, a tragedy that cast a spotlight on what many have decried as widespread negligence and mismanagement in Iraq’s hospitals after decades of war, sanctions and corruption.  The ward, opened three months ago, contained 70 beds in three large halls.

In a condolence message posted on the Patriarchate’s website on Tuesday, Cardinal Louis Raphael Sako, the Patriarch of the Chaldean Catholic Church, offered “condolences and solidarity to the families of the victims” and expressed the Church’s “closeness and prayer so that God may grant the victims His vast mercy”.

“As it offers condolences and sympathy to the relatives of the victims, the Church expresses its closeness to them, and its prayers so that God may bestow His mercy on the victims,” the message said. The leaders of the Chaldean Church expressed hope that “this national catastrophe” may “awaken the consciences of Iraqi officials” and free them from their absurd infighting.  They prayed that those in authority may strengthen themselves by joining hands and taking the responsibility to overcome this difficult stage by helping the country get back on its feet in full security, stability and guarantee of services, and by ensuring such disasters are not repeated in the future.

Condolences and spiritual closeness to the victims were also expressed by Pope Francis in a telegram that Vatican Secretary of State, Cardinal Pietro Parolin sent on the Pope’s behalf to the Apostolic Nuncio to Iraq, Archbishop Mitja Leskovar.  “Deeply saddened”, the cardinal wrote, the Holy Father “prays especially for those who have died and for the comfort of their families and friends who mourn their loss”.  “Upon the patients, staff and caregivers he invokes God’s blessings of consolation, strength and peace,” the message said.  The Pontiff who was in hospital recovering from a scheduled intestine surgery on July 8, returned to the Vatica

Chaldean Archbishop Bashar Matti Warda of Erbil also expressed his condolences at the tragedy.  “Our prayers and deepest sympathy for those who perished or were wounded in the fire at the al-Hussien hospital Covid 19 ward in the city of Nasiriyah, Iraq,” he wrote in a Twitter post.   “We also pray for their families and the hospital workers who sacrifice so much to save the lives of others.”

Iraq’s health ministry on Tuesday had reported 92 people dead in the fire.  But Italian news agency ANSA reported the ministry revising the death toll down to 60 on Wednesday.

The devastating fire broke out in the night of 12-13 July in the temporary Covid ward set up near the hospital. Authorities at one point said the fire was caused by a short circuit. Another official said the blaze erupted when an oxygen cylinder exploded.

Mourning families who buried their dead, blamed both the provincial government and the central government in Baghdad, saying the disaster could have been prevented.

Earlier in April, at least 82 people were killed and 110 injured in a fire at a Baghdad hospital that broke out when an oxygen tank exploded. Iraq’s health minister resigned over the disaster.

Meanwhile, Iraq is in the midst of another severe Covid-19 surge. New cases per day peaked last week at 9,000. Iraq’s war-crippled health system has struggled to contain the virus. The country has recorded over 17,000 deaths and 1.4 million confirmed cases.