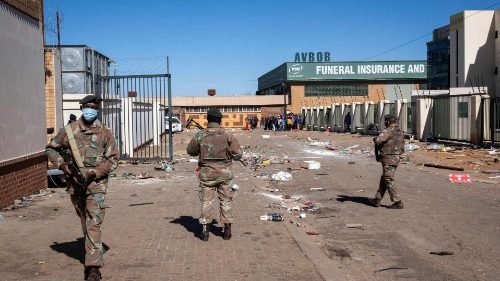 Cardinal Wilfrid Napier, Archbishop Emeritus of Durban reflects on the recent days of unrest in South Africa and reiterates Pope Francis’ appeal for peace in the country.

South Africa has been gripped by massive riots and looting in recent days, in the worst violence the country has seen since it achieved democracy in 1994. Over 200 people have died and more than 1000 arrests have been made as security forces struggled to restore order.

The unrest began on July 8 as former South African President, Jacob Zuma turned himself in to authorities to serve a 15-month jail term for contempt of court. Zuma’s supporters in his home province of KwaZulu-Natal set up roadblocks and burnt tyres and vehicles on highways in protest. The protests spread to other areas including to Gauteng province, Johannesburg and to Pretoria. Mobs targeted shopping malls, factories and warehouses, burning some and looting others bare.

As clean-up operations continue after the protest and authorities battle to reestablish civil order, the massive impact of the protests is observable in the country that has been severely challenged by three waves of the Coronavirus pandemic which have further exacerbated its already difficult socio-economic situation.

During the Angelus prayer on Sunday, Pope Francis appealed to South African politicians, faction leaders and those involved in the violence to work together to restore peace. The Pope also prayed that the desire that guided the people of South Africa – the rebirth of harmony among all its children – may never be forgotten.

“Together with the bishops of the country I direct my heartfelt appeal to all those with responsibility who are involved, that they may work for peace and collaborate with the authorities to provide assistance to those in need,” the Pope said.

Gratitude for the Pope’s prayers

In an interview with Linda Bordoni from Vatican News, Cardinal Wilfrid Fox Napier, Archbishop Emeritus of Durban, spoke about the situation in the country in light of the recent unrest and the Pope’s appeal for peace.

Expressing gratitude for the Pope’s closeness to South Africa, Cardinal Napier noted that the Pope’s prayers are a sign that the wider Church is praying for the country and it is being well looked after from the spiritual point of view.

He also extended his gratitude to the Apostolic Nuncio to South Africa, Archbishop Peter Wells, who compiled statements from different church bodies including the South African Bishops Conference (SABC), the KwaZulu-Natal Christian Council and the South African Council of Churches and made a report that was sent to Rome.

Speaking on the impact of the episodes of violence and looting that characterized the days of protests, Cardinal Napier observes that calm seems to have been restored but the streets are still marked by scenes that tell the tale of the destructive protests.

He gave the example of a shopping mall a short distance away from his residence that has been reduced to an empty shell by the actions of the looters. Before the unrest, the Cardinal lamented, “you could get everything there, from food to the highest technology.”

Cardinal Napier also highlighted that the protests have further triggered concerns for good shortages, especially among poor people. Many, he said, face hunger, if not starvation “unless relief comes in some form, and in abundant amounts.”

Speaking further, Cardinal Napier bemoaned the plight of the poor who are victims of the “tragedy” of leaders who have allowed selfish and partisan interests to supersede the interest of the country and as a result, “are prepared to sacrifice the future of the country in order to maintain or to gain power over the governing party.”

“That is what is so sad,” he said, “that after 3 decades, we still have people that have selfish ways of looking at things and are not seeing the South African community as the one that they are serving, but their own self-interests.”

The Church in service of the poor

Amid the challenging situation, Church bodies have been doing something to alleviate the sufferings of the poor and the vulnerable.

Cardinal Napier explained that a group of church leaders has held weekly meetings online since the beginning of the Covid-19 pandemic to take a united stand as regards safety measures that will help their communities survive these challenging times. More recently, however, following the eruption of the violence in the country, the meetings have tried to address the “Covid of the soul” – as he describes it – which “is taking hold of the nation and has destroyed so many peoples’ way of thinking and living.”

Concluding, the Cardinal expressed hope that the recent happenings in the country may inspire citizens to speak up for good leadership and urged prayers that the country may have the resources to help the poor and the vulnerable.

Since last year, South Africa has lost more than 60,000 people to the Covid-19 pandemic. The nation still battles with a third wave of the virus, powered by the more transmissible Delta variant.

Pope Francis saddened at loss of life in Iraq