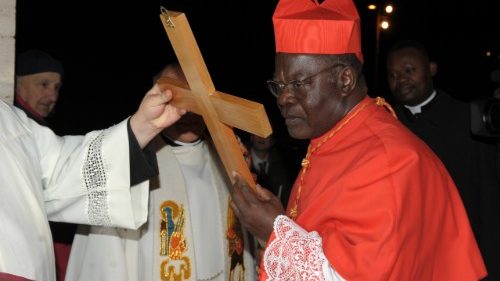 Congolese Cardinal Laurent Monsengwo Pasinya died on Sunday in Versailles, at the age of 81. At the beginning of July, his health deteriorated and he was hospitalized in France. A biblical theologian, he was a member of the Council of Cardinal until 2018, when as archbishop of Kinshasa, he decided to dedicate himself to work for peace in his country.

A tweet on Sunday, 11 July, by Cardinal Fridolin Ambongo, revealed that Cardinal Monsengwo Pasinya had died in Versailles, France: “I am deeply saddened to announce to the Catholic Christian community and to all people of good will the death of Cardinal Laurent Monsengwo”. A deep sorrow shared by the entire Congolese Church, which remembers the cardinal as a man of “international stature,” who dedicated his life to building “a more just world.”

A member of the Council of Cardinals

A biblical theologian and the first African to earn a doctorate in Scripture from the Pontifical Biblical Institute in Rome, Pope Francis had chosen him to be a member of the Council of Cardinals, established at the beginning of his pontificate to study a reform of the Curia and assist the Pontiff in governing the Church. Monswengo took leave of the body on 12 December 2018, a month before retiring as local Ordinary of Kinshasa. For the past year, the archbishop had been engaged in the delicate work of restoring peace in “his” Democratic Republic of Congo, that is plunged into a serious political and social crisis under the government of Joseph Kabila who is in his third term despite his previous mandate expired at the end of 2016.

At the forefront of the peace process in DRC

The peace process saw the Church itself involved at the forefront, promoting presidential elections in 2017. The vote had already been postponed several times by Kabila himself until the election in 2019. Cardinal Monswengo, whose frankness and freedom of speech were well known, had not hesitated to play a leading political role in this difficult situation, which ended with a de facto political change. Of particular note was his forceful speech on 2 January 2018 in which he decried the harsh repression by security forces of a peaceful demonstration of Catholics, organized by the Comité Laïc de Coordination to demand the application of the New Year’s Eve Agreements, signed the year before between the government and the opposition under the auspices of the episcopate to encourage the exit of Kabila. 8 people were killed that day (including some priests) and about 140 arrested. Monsengwo condemned the “barbaric” repressive action and decried “preventing Christians from entering churches to participate in Mass, the launching of tear gas during the celebration of the Eucharist in the various parishes of Kinshasa, the theft of money and telephones,” as well as “the raids of parishes” under the pretext of searching for organizers of the protests, “the killings, the bullets on Christians who were holding Bibles, rosaries and crucifixes, the arrests of priests and faithful.” “It is time for truth to prevail over systemic lies, for mediocrity to be stamped out and for peace and justice to reign in the Democratic Republic of Congo,” said the Archbishop Emeritus of Kinshasa.

Funeral in the coming days

Born in 1939 into a family of eight children, ordained a priest in 1963, then a bishop in February 1980 by St. John Paul II, Cardinal Monsengwo Pasinya held various posts, including that of auxiliary bishop of Inongo, auxiliary of Kisangani, archbishop of Kisangani and archbishop of Kinshasa. He was also president of SECAM, the Symposium of Episcopal Conferences of Africa and Madagascar. Pope Benedict XVI elevated him to cardinal in the Consistory of 20 November 2010. In 2012 he preached the Lenten Spiritual Exercises to the Roman Curia in the presence of the Pope. On 13 April 2013 Pope Francis assigned him a member of the Council of Cardinals for the revision of the Apostolic Constitution, Pastor Bonus, on the Roman Curia. In the coming days, the cardinal’s remains will be brought back to the Kinshasa, the capital of the Democratic Republic of Congo, where he will be buried in the Cathedral.

Pope Francis to remain a few more days in hospital