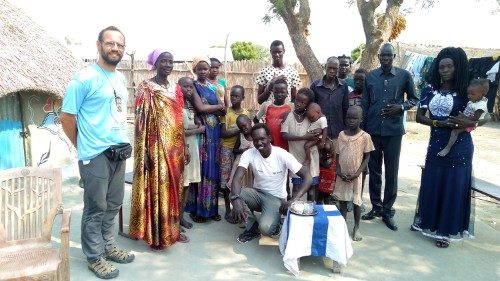 Three months and six surgeries after being shot shortly after his appointment as the new Bishop of Rumbek in South Sudan, Fr. Christian Carlassare invokes the Blessed Virgin Mary’s intercession for peace in the landlocked northeastern African country.

Recently-appointed as bishop of Rumbek in South Sudan, Fr. Christian Carlassare has offered prayers for peace in the conflict-ridden country, invoking the intercession of Our Lady to bring healing and change from a past of violence, division and poverty to a future of unity and prosperity.

He made this prayer on Sunday, at the shrine of Madonna dell’Angelo in Piovene Rocchette, Italy, where the faithful gathered to renew the vows made to Our Lady in 1631, as the people were delivered from the plague – one of the most virulent outbreaks of pestilence in Italy – and other disasters.

Bishop-elect Carlassare recalled Pope’s Francis gesture of kissing the feet of South Sudanese leaders when he invited them to Rome in 2019, and urged all South Sudanese to be won over by the Holy Father’s humility and love to “recognize the dignity of every person and work for unity.

“I know it is a long path and a demanding mission but this is the only path to life, and the mission of the Church,” he said. “May Mary intercede for us!”

Father Carlassare, who is presently undergoing a period of rehabilitation and treatment in Italy after suffering gunshot wounds in a recent attack, also seized the opportunity of the renewal of the vow to offer some of the bullets with which he was shot.

“I will take the chance … to offer some of the bullets I was shot with exactly three months ago,” he said. “I have always felt the protection of our Mother Mary, and now, even more, after all that has happened.”

“We look at South Sudan with sympathy, with a positive outlook and hope,” he said. “We acknowledge all peoples and communities that are striving for peace, and demand that all those groups that hold weapons illegally will abandon them and never resort to violence again.”

On the night of the 25–26 April, Carlassare was injured after being shot in the legs by unknown assailants who broke into his residence. The Italian Comboni missionary, who was appointed bishop in March, arrived in early April and had not even yet been ordained a bishop at the time of the tragic incident. He survived the assault and was rushed to hospital.

Recalling the attack in an interview with Fides news agency, Carlassare described it as “a dramatic moment” in which he had to entrust himself into God’s hands, “thinking that my work will end there.”

“This gave me freedom and the awareness that our witness is valid when we are faithful to the Gospel to the end, in our daily fidelity,” he said, adding that for the first three weeks after the incident, he was restricted to bed rest after a first simple “bandage” operation in Rumbek to stop the loss of blood.

Following this first operation, Fr. Carlassare underwent six different surgeries in Nairobi, Kenya, and only started walking with crutches a few weeks ago as he continues to recover. Now, he is in his hometown of Vincenza, Italy, and has to exercise in order to fully heal.

“I have no doubts about the desire to return to my South Sudan, people are waiting for me and, beyond the many problems, there is also great hope. And I want to be part of it,” Carlassare affirms.

“First of all, I have done what I could for my health, and I think I can come back as soon as possible,” he said, but stresses the importance of doing everything possible to resolve his case “and, perhaps even more crucial, that the diocese has an internal path of regeneration to guarantee safety and the possibility of working and making decisions.”

In the interim, an apostolic administrator has been appointed to provide for leadership and pastoral care, as the faithful await Carlassare’s return.

Meanwhile, authorities in South Sudan are still in search of the culprits in the attack, but have not put out any official statements yet. However, there have been several arrests and there are currently six people in prison who have been transferred from Rumbek to Juba. These six people, Fr. Carlassare explained, are part of a family that acted “in the interests of the clan that, in all likelihood, disagreed with my appointment.”

He further noted that any family who uses violence to pursue their own interests “are armed individuals who have chosen to commit these acts” and “it does not matter whether they are Christians or of other faiths.”

Father Carlassare added, “In the end they attracted a lot of resentment from the majority of the population, while there has been a real solidarity race towards me…a very positive reaction that gives hope that the population will take sides against senseless violence.”

South Sudan has suffered long periods of conflict, combined with famine, poverty and humanitarian emergencies. More recently, however, a peace agreement struck in 2018 seems to be holding, although the parties still struggle to maintain it.

Carlassare notes that the agreement is “a moment of great hope” for South Sudan, which celebrates its 10th anniversary, and makes us “look at the country with a little more perspective.”

However, he added, there are two elements that must be taken into account. The first is that “peace is always very fragile,” and is subject to limits of violence that undermine it. Thus, “it is a long journey that must be taken without being frightened of how far it can take us.”

The second “is the excessive circulation of weapons” which end up in the hands of civilians not controlled by the government.