Aram I: Joint efforts needed on the path to recovery for Lebanon 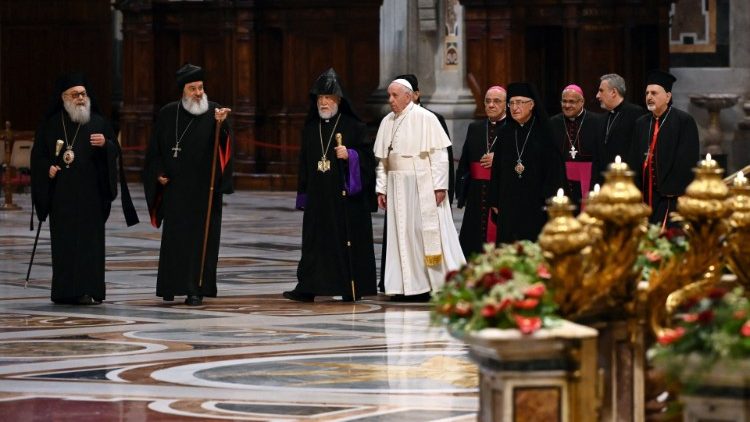 In an interview with Vatican News, the Catholicos of Cilicia of the Armenians, Aram I, reflects on the dire situation in Lebanon and the importance of the Day of Prayer and Reflection held on 1 July on the path of recovery for the country

Pope Francis and Lebanon’s Christian leaders held a Day of Prayer and Reflection in the Vatican on Thursday, for the current situation in the trouble-ridden country, and to implore for the grace of peace and stability.

Among the delegation of the Christian leaders was Aram I, the Catholicos of Cilicia of the Armenians, who spoke to Robert Attarian from Vatican News about the ecumenical meeting and the current situation in Lebanon.

“The meeting in the Vatican of the Christian spiritual leaders of Lebanon was in my opinion, a landmark event – not in the political sense – but in the perspective of Christian-Muslim cohabitation,” the Catholicos said.

He explained that the Christian leaders came to share with Pope Francis “the pain, the suffering, the hopes and the expectations” of the people of Lebanon, “without any distinction or discrimination”, as the country cannot be understood without the Christian-Muslim coexistence that “constitutes the basis and the identity of Lebanon.”

The meeting, he said, “was a significant step forward by taking Lebanon from its present stagnated, chaotic state to new horizons.”

On the path towards “recovery”

Lebanon has been going through a burgeoning economic crisis with severe consequences on its population. The country’s woes, which intensified in late 2019, is rooted in decades of corruption and mismanagement by a post-civil war political class that has accumulated debt and done little to encourage local industries.

In the face of the economic collapse of the country, the Catholicos noted that the meeting also focused on exposing the present situation in its major aspects, with the aim of seeking the most efficient means embark together a process that he refers to as “recovery.”

Proposing concrete steps to achieve this recovery, the Catholicos underlined the importance of the formation of a new government that will focus on addressing socio-economic problems as a matter of priority in order to meet the needs and expectations of the people.

The closeness of the Pope

The Catholicos went on to express his appreciation of Pope Francis’ closeness to the people of Lebanon amid the country’s trying times, noting that this meeting in the Vatican is “a concrete manifestation of solidarity and support.”

He said that the Vatican, through its moral authority, can play a significant role in supporting Lebanon by “reminding the international community of the crucial importance of Lebanon and the vital need of having a new government.”

In this regard, he held up Pope Francis’ message at the end of the ecumenical ceremony on Thursday, noting that the Holy Father gave a clear message to the international community and political authorities in Lebanon not to ignore the needs of the people.

According to the Catholicos, the message of Pope Francis and the meeting can be summed as: “The people are suffering, therefore, by all means, you have to act! This is the time that we have to act!” he urged.

Concluding, the Catholicos of Cilicia of the Armenians invited all – Christians and Muslims, political and community leaders – to work together on the process of recovery for Lebanon.

Pope: Science is a great resource for building peace